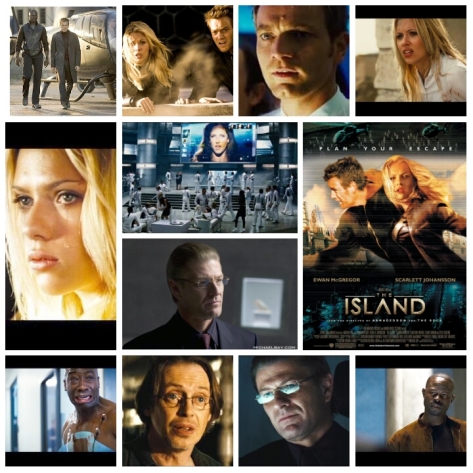 I love The Island, because it breaks ranks from Michael Bay’s mostly uniform career and gives us entertainment where story is as important as action, which can’t be said for most of his films. Don’t get me wrong, I love his destructive maelstrom of a career to bits (except Transformers and Pain & Gain. Those are shameful.), it’s just nice to get a movie from him with something to latch onto besides just… boom crash smash. His visual setups are like fire dancing on the retinas, but with The Island we get to see what’s behind those eyes and actually get a concept to explore along with our helping of razzle dazzle. Now this type of story has been done before, in stuff like Logan’s Run or the lesser known Clonus Horror, and obviously this time around the story is jazzed by a considerable amount of chromed up energy and adrenaline. In the far future, a group of people are kept inside a gargantuan facility and told that the world’s population has been nearly wiped out by a contamination. Only one untainted zone remains: The Island. It’s a place where some take off to, after winning a much touted ‘lottery’ that allows them access. Only, they aren’t going to any such place at all. They are selected based on the need for organs, spare biological matter and baby carriers for their human counterparts, the rich and affluent. They’re dormant cattle, so to speak, clones awaiting empty promises. Lincoln Six Echo (Ewan McGregor) is one such individual, a curious fellow who first suspects something is wrong with their utopian existence, and once confirmed knows he needs to get out. Dragging along his friend Jordan Two Delta (Scarlett Johansson) he makes a harebrained run for it, escaping the facility and venturing into the world outside, which is anything but contaminated. I like what Bay did with the production design; Things aren’t too wacky or space agey, and more or less that same as now, but accents like flying motorbikes or massive additions to existing skyscrapers let us know how brave of a new world it is. Lincoln and  Jordan suffer considerable culture shock as they flee, and it’s amusing to see the childish way they react to simple things like a telephone, or ordering drinks at a bar. The facility’s Director, an arrogant son of a bitch named Dr. Merrick (Sean Bean) sends a team of off the books ex special forces dudes after them, led by Laurent  (Djimon Hounsou gets the best moments out of the film, the only actor who can stop the momentum dead in its tracks with his soulful performance). From there a lot of it is a deafening roar filled with chases, car crashes, fights and a spectacular highway chase that will wake up the tenants both above and below your apartment. Yes, Bay just can’t help throwing in colossal action scenes where they aren’t particularly needed, and complain if you must, but if it’s really that much of a wrench in your enjoyment of the actual story going on around it,  then use such interludes for a bathroom break or to go apologize to the neighbors for the racket your speakers are kicking up. You can only hope for Bay to reign it in so much, the dude just loves his action. Ask him to direct a Jane Austen adaptation and you can bet your hat he’d throw in a fireball or two in just for good measure. It’s his passion, and I don’t resent people for what they love to do. In any case it’s a terrifically fun piece. McGregor and Johansson are pitch perfect, as they begin to clue in about the world around them, lashing out in anger over what’s being done to them and becoming quite resourceful. Bean resists the label of villain with his performance, branding Merrick as an idealist whose breakthrough blinded him into extremism, from which there is no turning back. Steve Buscemi shows up bearing kindly comic relief as a tech worker who assists in their escape. Michael Clarke Duncan is very affecting in one scene as a clone who finds out the truth the worst way possible. There’s also work from Shawnee Smith, Chris Ellis, Max Baker, Glenn Morshower and an incredibly bizarre cameo from an uncredited Kim Coates. Steve Jablonsky composes what I believe to be his finest, most stirring work and the best score to date in a Bay flick, adding to the sweeping scope and pure cinematic current that this one soars on. One of my favourites, highly recommended.