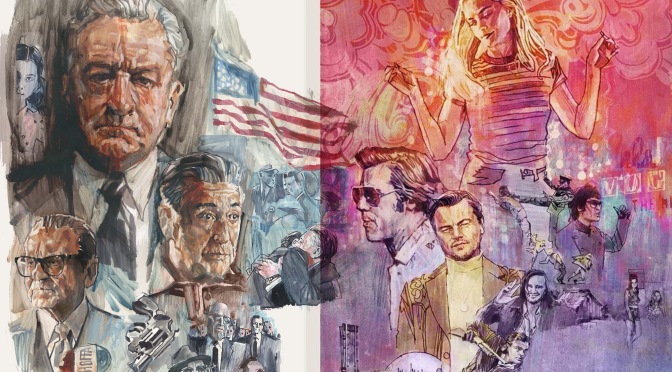 Two films, one year, three histories. Altering history isn’t easy, but leave it to the power of Martin Scorsese and the retro-fitting of Quentin Tarantino to formulate an indelible mark that sets into question our very own notions of the past. We are, of course, talking about The Irishman and Once Upon a Time… In Hollywood, a pair of 2019 films that are today still immensely popular fodder for cinephiliac conversation, but are somehow overlooked in their entwining subtexts. 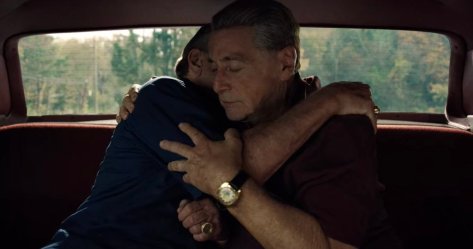 The Irishman begins with a title card — I HEARD YOU PAINT HOUSES — which foreshadows a conversation between teamster leader Jimmy Hoffa and budding gangster Frank Sheeran, future friends fated for tragedy. The film is bifurcated with two performances, one indulgent and one deeply understated. Pacino’s indulgence allows the veteran to fall into his iconically shouty, spastic gruffness, but because he brings an emotional dignity and devastating gravitas to each scene in which he stars, he’s able to effectively steal the film. At the heart of the movie, though, is Robert De Niro’s soft-pedal portrayal of Sheeran. He’s unemphasized and unmoved, capitalizing on Sheeran’s lack of empathy, penchant for sociopathy, and ultimate isolation. Frank kills his best friend, his only friend, Jimmy, at the top of the last third of The Irishman, granting us a peek into the “what if?” of history, spiraling both the audience and Sheeran into a purgatory of regret. Scorsese utilizes these performances in dual fashion to tell the sprawling story of an American dream — all that individuality, familial responsibility, and work ethic America is meant to represent — left for dead, devastated, and ruined in a nursing home. 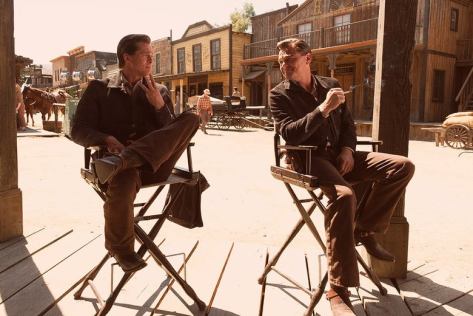 Once Upon a Time in Hollywood also features two male leads, one equally showy, one equally downplayed. DiCaprio is hilarious and fantastic as Rick Dalton, an aging TV star of the 60’s who is coming closer and closer to being booted into character actor territory from his place in stardom. Whereas he used to hold his own against the heavy in Bounty Law, along with his guest spots on Hullabaloo, he now finds himself a “sexy, evil Hamlet” on the set of the Lancer pilot. His stunt double, long-time friend, and gopher, Cliff Booth, is the yin to his yang. Pitt, who won an Oscar for his role, plays it cool — and, yes, he is very, very cool in the role, sporting a Champion t-shirt, enjoying episodes of Mannix, fixing roof satellites, killing Manson cultists… all in a day’s work. Yes, history is also altered here by Tarantino, albeit in a more extreme, brutal, perhaps even hilarious way.

It would’ve been really easy for Once Upon a Time in Hollywood to wade into that morose pitfall of discovery — that our favorite movie stars bleed red just like we do and that it’s up to the nastiness of the world to prove it to us with a knife — but the film has just a little more to say than that. It presupposes all the above and then asks, “What’s the point in living in a world like that, when you don’t have to?” Tarantino understands the power of film, the world-building that comes with a movie camera. If he wants to live in a world in which Sharon Tate’s murder was halted by an acid-trip-experiencing stuntman, then by God, who’s to stop him? It’s the same for Scorsese’s work — a career of examining Catholic guilt through the lens of street urchins, disturbed protagonists, and gangsters. If Scorsese wants to alter the past, provide a fate for Jimmy Hoffa that’s otherwise nonexistent, in order to examine grief and remorse, then he should be allowed to do so. Why should history be followed by these men?

The Irishman does for Jimmy Hoffa what Once Upon a Time in Hollywood did for Sharon Tate — not just giving us a self-proposed alternate look at history, but also attempting to provide some categorical sense of closure. The emotional punch that stems from the hindsight and understanding of what took place in real life is overwhelming by the end of both films. The tragedy at the heart of The Irishman is almost Shakespearean, not just in length, but in the elegiac, time-turned way it looks at aging, empathy, loyalty, friendship, and loneliness. It also reveals an exacting blood relation with Tarantino’s film, in that the joy of each movie revolves around the machismo energy of the male stars, but the heart is revealed in two subtle, heartbreaking female performances by Anna Paquin and Margot Robbie (and it’s no surprise that both movies have been criticized for the lack of female characterization by the reactionary public — can the point of either movie fly any higher over someone’s head?) The Irishman and Once Upon a Time in Hollywood may take place on opposite sides of the country, but they both reveal a whole lot about where we’re from as a country, east to west, and where we are likely (or, unlikely) to go.

Tyler Harris is a film critic, English teacher, and former theater manager from Louisville, Kentucky. His passionate love for cinema keeps him in tune with his writing.