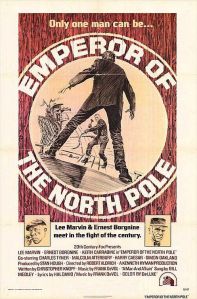 Emperor of the North, aka Emperor of the North Pole, is an exceedingly masculine film. You can smell the cinematic machismo dripping off of Lee Marvin and Ernest Borgnine all throughout this beefy action-adventure from man’s man director Robert Aldrich (The Dirty Dozen, The Flight of the Phoenix). Released in 1973, this stunningly photographed train adventure is set during the height of the great depression, and centers on a wise hobo named A-No.-1 (Marvin) who battles it out with a sadistic train conductor named Shack (Borgnine). Shack doesn’t allow any transients to catch a free ride on his train, and he’s more than happy to smash a bum in the head with his hammer and throw them under the wheels to their death. There is a rugged physicality to this film, and almost all of it feels authentic and shot on location on real trains. The crisp Oregon backdrops lend verisimilitude to all of the action, while the stunt-work is consistently ridiculous, with numerous leaps and tumbles and dust-ups all preformed organically and with a minimum of fuss. There’s a crude sensibility and rough disposition to this film at times, with Christopher Knopf’s straight forward and tough-talking screenplay (with uncredited story contributions by Jack London) containing some real gems of dialogue, with the final moments of the film carrying a witty and defiant streak of ironic, introspective humor. Keith Carradine’s memorably skeevy performance as Cigaret was his second overall, and he brought an uneasy charm to his role as that of a rookie train-rider who crosses paths with the taciturn Marvin, who utterly destroys as the surly A-No.-1. The supporting cast includes solid turns from Charles Tyner, Matt Clark, Liam Dunn, and Malcolm Atterbury, while Frank De Vol’s triumphant score pounds away during the action, but smartly relents in key spots. Cinematographer Joseph F. Biroc, a frequent Aldrich collaborator, really shot the hell out of this motion picture, with certain sequences sort of defying technical logic considering the era that the film was produced in, while the entire endeavor feels dangerous while looking beautiful.