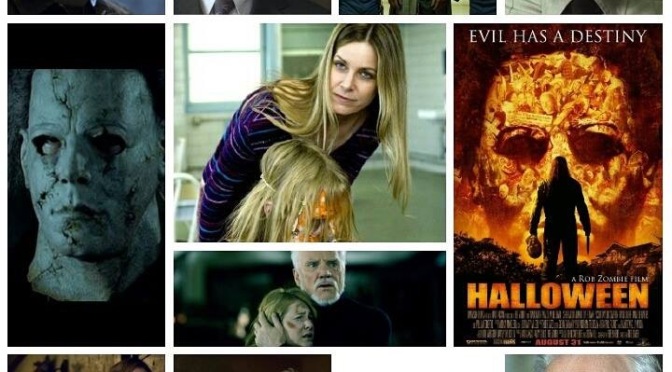 Let me get this clear right off the bat: I’m a huge, huge fan of Rob Zombie’s Halloween reimagining. Love it. At the time it was announced I was super fanatical about the original franchise, and when I heard that Zombie, who’s films I was a huge fan of at the time, was remaking my favourite horror film of all time, I had a conniption. Then casting news began to pour in and when I saw at least eight names on the lineup who are all time favourites of mine, I was immediately, unconditionally sold. Good thing the guy didn’t let me down. He went his own way with this one, while at the same time still staying true to its mystical roots in Carpenter’s minimalist catalyst masterpiece. Yes, Zombie has has a certain pervasive flair for really crude dialogue and characters that would make both the Addams family and he Beverly hillbillys cringe, but that’s his style, and love it or hate it he’s brought it to Haddonfield and then some. He mostly stays true to the blueprint of the original film, yet adds a fascinating for five minute opening act that greatly expands on Michael’s early years, both his tumultuous home life and subsequent years in Smiths Grove Sanitarium under the care of Dr. Loomis. Malcolm McDowell makes a stellar replacement for Donald Pleasence, updating Loomis by bringing humour, hurt and humanity to a role previously rooted in archetypal theatricality. Newcomer Scout Taylor Compton carries herself well as Laurie Strode, and Danielle Harris, who played Jamie Lloyd in Halloween 4 and 5, plays ill fated Annie Brackett. Rob Zombie has a knack for finding underrated character actors who don’t always get the chance to show their stuff outside of the genre niches and blasts them to the forefront of the drama in career best roles. Such is the case with Brad Dourif here, a criminally underrated dude who plays kind hearted Sheriff Leigh Brackett. He’s got a down to earth jive (Thanks to Zombie’s writing once again) that liven up the film a lot. There’s an unbelievably cool roster of talent including Danny Trejo, Udo Kier, Adrienne Barbeau, Dee Wallace, Tom Towles, Bill Moseley, Daniel Roebuck, Pat Skipper, Richard Lynch, Clint Howard, Sybil Danning, Leslie Easterbrook, Ken Foree, Sheri Moon Zombie in a surprising sympathetic turn as Michael’s poor mother, and William Forsythe in an absolutely hysterical cameo as his extremely verbally abusive, endlessly vulgar stepfather. That cast though. Still in awe eight years later. People railed against this remake for being crass, bloody and brutal. Pish. Zombie boldly steered the franchise into uncharted territory and actually made an effort, which is more than I can say for any other horror remake I’ve seen. Supremely stylish, down to earth, casted so well I can’t even right now, and tough as nails in the fright department.