If you’re looking for an unpretentious, totally nasty horror thriller with just the right amount of sex and violence,  look no further than Rites of Passage, which was written and directed by W. Peter Iliff, the creator of Point Break. The film centers on a group of Anthropology students who decide to take the wrong field trip, to that of an ancient Indian burial ground, with their sleazy professor in tow, played by a game Stephen Dorff. One of the student’s parents happens to have a ranch which is sitting on the site of the burial ground, and it’s decided, in classic horror movie fashion, that it would be a good idea to hold a sweat-lodge-style ceremony in an effort to contact the spirits. Tea that’s been dosed with mind-expanding drugs doesn’t hurt, either! But all hell breaks loose once the drug addicted older brother of one of the students makes an appearance, here in the form of a severely whacked-out Wes Bentley. It seems that Bentley has a meth-cooking operation happening at the ranch, and he’s mixed up with a mental-case baddie with some intense personal demons played by Christian Slater, who isn’t too impressed to have all these new visitors. Before you know it, the innocent partying is cut short, while the body count mounts, with the attractive cast getting to do their best run-scream-and-fighting. Iliff wastes no time with the fast moving narrative, and takes the film into surreal, wildly tripped out places before its conclusion; the sight of Slater hallucinating a stuffed monkey, which tries to talk some sense into the increasingly unhinged killer, is just as lunatic and hysterical as it sounds. This is one of those low-budget items that loves to be playing in the milieu that it is, filled with some gory kills, some nasty black humor, and a tone that juggles thrills with stoner humor and all sorts of wild and crazy ideas. It’s never boring, it’s frequently ridiculous in an over-the-top-entertaining way, and if you need a down and dirty genre item to fill an evening, this one should do the trick. 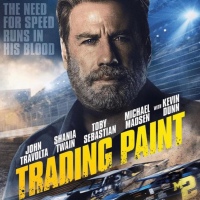