Locke is a mesmerizing film to study. Dominated by a spellbinding, tour de force performance from Actor of the Moment Tom Hardy, Steven Knight’s fascinating existential drama Locke is nerve-rackingly intense, fully absorbing and completely unpredictable, due in no small part to the narrative conceit of the entire film taking place from the interior of a car. Confined to the driver’s seat of his BMW SUV, Hardy gives an all-stops-out performance – this guy is the real deal, seemingly capable of any role that’s asked of him, always able to elicit sympathy no matter how ragged the character, going from subtle to big at the drop of a hat. The dreamy, artsy cinematography by Haris Zambarloukos leaps off the screen; it’s London-street-lamp-at-night-gorgeous, cousins with Collateral in some respects, with reflections and window patterns dotting the expressionistic 2.35:1 widescreen space. Because the story is exclusively delivered via a series of desperate phone calls that Hardy is having with a variety of people, there’s always the question of how realistic can this scenario play out. But because Knight is so strong with his words and so precise with his visuals, the film becomes more than just a trick-stunt – it’s a gripping, all-together brilliant ride that will leave you with sweaty palms by the finish. 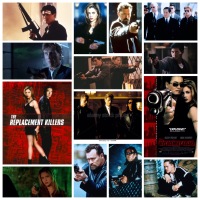