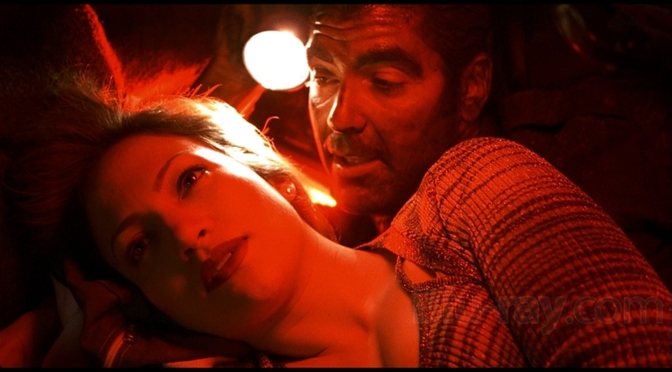 “It’s like seeing someone for the first time. You can be passing on the street and you look at each other and for a few seconds there’s this kind of recognition. Like you both know something, and the next moment the person’s gone. And it’s too late to do anything about it. And you always remember it because it was there and you let it go. And you think to yourself, what if I stopped? What if I said something? What if?” – Jack Foley

This bit of dialogue from Out of Sight (1998) perfectly captures the essence of the relationships between the characters in this film. It is about the what ifs and the what could have beens. What the characters do and, more importantly, what they don’t do that directly determines their fate.

As the film begins, Jack Foley (George Clooney), a career bank robber, escapes from a Florida prison with the help of his loyal accomplice Buddy (Ving Rhames). In the heat of the moment they kidnap a beautiful Federal Marshall named Karen Sisco (Jennifer Lopez). She and Jack are stuffed in the trunk of her car as they make a hasty retreat. Trapped in such a small, confined space Jack and Karen have nothing to do but engage in idle chitchat. Even though they are on completely opposite sides of the law there’s a spark, an initial attraction that blossoms into something more as the film progresses and their paths inevitably cross again.

Out of Sight is based on the book of the same name by Elmore Leonard. He had wanted to do a bank robber story for a long time. Several years ago, he saw “a picture in the Detroit News of an attractive young woman who was a Federal Marshal standing in front of the Federal Courthouse in Miami. She held a shotgun which was resting on her cocked hip and as soon as I saw that picture, I knew it was a book.” Danny DeVito bought the rights to a previous Leonard book Get Shorty for his production company Jersey Films. After the success of that film, he bought the rights to Out of Sight.

The film came to George Clooney and Steven Soderbergh at a time when both of their careers had reached a critical junction. Clooney was coming off the commercial and critical train wreck known as Batman and Robin (1997). Soderbergh had completely shunned the mainstream with the one-two punch of Gray’s Anatomy (1996) and Schizopolis (1996). Both men were looking for a hit that would put them back on the map. Soderbergh had already made two films for Universal and one of its executives, Casey Silver, offered him Out of Sight with Clooney attached. Soderbergh was close to making another project and was going to pass but Silver told him, “These things aren’t going to line up very often, you should pay attention.”

Soderbergh and screenwriter Scott Frank achieve a perfect mix with Out of Sight. The film’s pace moves with effortless ease and self-confidence. They know when to slow things down and savor the moment as well. As Frank proved with his excellent screenplay for Get Shorty (1995), he perfectly understands Leonard’s distinctive cadence and the speech patterns of his characters. Cinematic adaptations of books are almost always inferior because so much has to be cut out or changed to fit into a two-hour film. However, Leonard’s books are tailor-made for movie adaptations because they are very visual and almost entirely dialogue and character-driven — ideal for the screenplay format. Out of Sight is one of those rare movies that is actually better than the book.

Soderbergh and his cameraman, Elliot Davis (White Oleander), paint their film with a specific color code. The bright colors of the Florida scenes — especially the prison sequences with vibrant blue and the bright yellow prison uniforms worn by various characters — provide a nice contrast to the second half of the film, which consists mainly of a gun-metal blue color scheme. The Detroit scenes have a cold, metallic feel to them and this really comes out. David Holmes’ catchy R&B score comes in and instantly transports the viewer into this world. He mixes in his own brand of funky electronica with old school tunes from the likes of the Isley brothers and Willie Bobo. From the atmospheric noises in the background to Holmes’ superb trip hop beats, this is a great sounding film.

After a string of so-so films, George Clooney finally found the right project that suited his particular talents with Out of Sight. With his movie star good looks and suave charm, he is perfectly cast as the smooth talking criminal. This may be his finest performance to date. For Clooney what attracted him to this role was the chance to play a character that evoked his cinematic heroes of the past. “When I was growing up the heroes for me were the bankrobbers — you know, the Cagneys and the Bogarts, Steve McQueen and all those guys, the guys who were kind of bad and you still rooted for them. And when I read this, I thought, This guy is robbing a bank but you really want him to get away with it.” Clooney’s style of acting is perfect for this role as he plays Foley with the right amount of laid-back charm. This is typified by his character’s introduction — the most pleasant, non-violent bank robbery ever committed to film. Clooney has such a likable screen presence that you want to see his character succeed.

Conversely, Jennifer Lopez is his perfect foil as a smart, tough law enforcement officer who can’t help but fall in love with this charismatic criminal. She is a very attractive woman but not above wielding a shotgun to apprehend a fugitive. There is a genuine chemistry between the two actors that makes their romance work. And it is this relationship that gives Out of Sight its depth. There is more to this film than snappy banter and a hip soundtrack. Incredibly, Sandra Bullock was originally considered to play Karen Sisco opposite Clooney, however Soderbergh said, “What happened was I spent some time with [Clooney and Bullock] – and they actually did have a great chemistry. But it was for the wrong movie. They really should do a movie together, but it was not Elmore Leonard energy.” Someone must’ve listened as the two ended up acting opposite each other years later in Gravity (2013).

A killer cast supports the two lead actors. Steve Zahn, an underrated character actor, is perfect as Glen, a stoner screw-up who looks up to Jack but is a royal pain in the ass. Dennis Farina plays Karen’s laid-back dad who buys his daughter a handgun for her birthday and just wants to see her married to a lawyer or a doctor. Albert Brooks is Richard Ripley, a bumbling white-collar criminal type who is in way over his head and sports a truly awful toupee. Don Cheadle plays “Snoopy” Miller, a tough guy-wannabe that is a classic schoolyard bully. Rounding this cast out is Ving Rhames, Jack’s tough, God-fearing partner in crime who always has his friend’s back.

Despite its lackluster performance at the box office, Out of Sight received widespread critical praise. It was clearly a career turning point for both Clooney and Soderbergh. The actor said in an interview that “Out of Sight was the first time where I had a say, and it was the first good screenplay that I’d read where I just went, ‘That’s it.’ And even though it didn’t do really well box office-wise — we sort of tanked again — it was a really good film.” Clooney went on to success with O Brother, Where Art Thou? (2000) and Ocean’s Eleven (2001). Soderbergh saw Out of Sight as “a very conscious decision on my part to try and climb my way out of the arthouse ghetto which can be as much of a trap as making blockbuster films. And I was very aware that at that point in my career, half the business was off limits to me.” The film’s critical reaction gave Soderbergh a foothold in Hollywood that led to the commercial success of Erin Brockovich (1999) and Oscar gold with Traffic (2000).

Out of Sight is a film about making choices and taking chances despite the sometimes inevitable, painful consequences. It is also an entertaining look at a collection of colorful characters and the exciting world they inhabit. This is a smart, sexy and wonderfully stylish crime thriller that was ignored by audiences (due to lousy advertising and an even worse release date) but garnered strong critical reaction (winding up on many Best Of lists that year). Fortunately, Out of Sight has been re-discovered on home video and recognized as one of the best Elmore Leonard adaptations ever put to film.