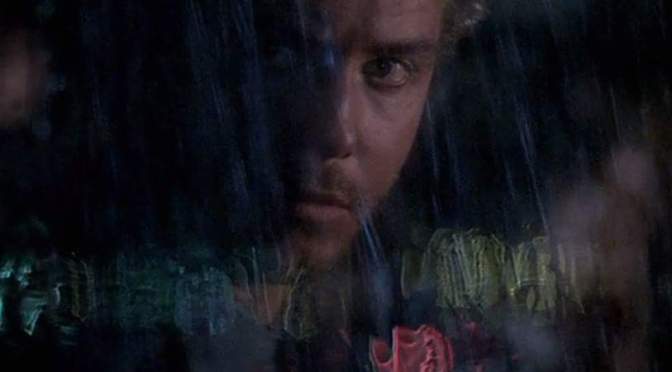 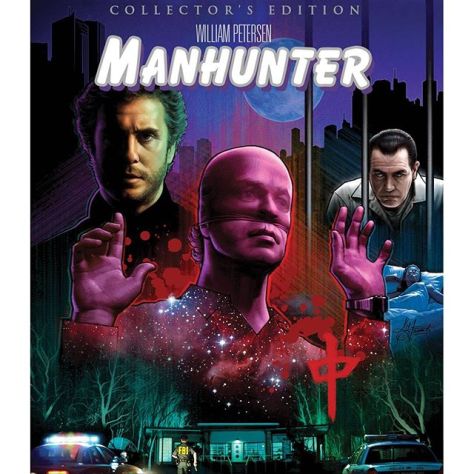 Of the film and television productions based on Thomas Harris’ series of acclaimed “Hannibal” novels, Manhunter is the most underrated piece. When the film was originally released in 1986, it met with (surprising to me) mixed reviews, with some critics calling into question director Michael Mann’s use of music, and the film’s unique visual aesthetics. Leading performer William Petersen’s acting skill was also the cause for concern amongst some critics, and the film was sadly a box office failure, raking in just 8.6 million dollars. In recent years, thanks to the popularity of The Silence Of The Lambs, its sequels and prequels, and a television series based on the books, Manhunter has been critically re-reviewed and wildly accepted as more than just a cult film, but as one of the finer films Mann has made to date, and quite possibly a superior film to The Silence Of The Lambs. Not every critic is right every time they put pen to paper.

Manhunter is a rich, meticulously layered, deeply psychological experience that crawls under your skin and seeps into your mind with its concoction of pulsating music, gorgeous cinematography, unsettling production design, and tortured characters. The film chronicles the investigation by former FBI criminal profiler Will Graham (Petersen) into a recent slew of grisly murders of rich families committed by the elusive Tooth Fairy, as the police have dubbed him after the bite-marks he leaves on his victims.

We first meet Will relaxing at his secluded Florida beach house with his wife and son, when his friend and former FBI superior Jack Crawford (the late Dennis Farina, who was a Chicago cop before his film career) comes knocking, asking Will to help authorities nab the killer. After a prior attack involving a certain cannibalistic serial killer I’ll mention later, Will is hesitant to become involved in the case. Most of him wants to stay far, far away from the dangers of this line of work, and doesn’t want to bear the deep psychological burden these kinds of cases can have on law enforcement. However, an unsettled part of his soul is thirsty for one last hurrah, and so Will joins up with authorities in the hunt for the Tooth Fairy.

Simultaneously, the Tooth Fairy himself, Francis Dollarhyde (Tom Noonan), continues to kill including the unlucky journalist Freddy Lounds (Stephan Lang), all the while becoming involved romantically with a co-worker at a St. Louis film lab, Reba McClane (Joan Allen). Meanwhile, both Graham and Dollarhyde receive help from that particular cannibalistic serial killer, the famous Dr. Hannibal Lektor (Brian Cox). Yes, you read that right. Lektor. Spelled that way just for this film, but “Lecter” in the books and other film and television properties. I know that seems odd, but it works. By the time the film’s violent conclusion erupts with the ferocity of a blood craving tiger to Iron Butterfly’s ominous In-A-Gadda-Da-Vida, between the pulsating score, the dazzling cinematography, the tense psychological atmosphere, and the nuanced performances, you’ll surely be white knuckled and riveted to the bone.

In The Silence Of The Lambs, and subsequent Hannibal oriented products, Lecter is somewhat of an over the top, grandiose villain. Sir Anthony Hopkins plays him with a venomous, spiteful, cynical aura and personality, with a twinkle in his eye and a grin ever present on his face. He seems to have waltzed out of a Shakespeare production, with his colourful verbiage and posturing. Even his slightest physical movements seem grand. But here in Manhunter, Lektor is brought down to Earth by Cox’s nuanced performance. Cox is genuinely creepy and unnerving in a  way Hopkins isn’t (Cox based his performance on Scottish serial killer Peter Manuel), precisely because Hopkins Lecter is so gloriously over the top, while Cox maintains a relaxed, collected atmosphere about his Lektor. One can imagine his Lektor character prowling the streets, conning unsuspecting folks into his maniacal grasp with his classy vocals and subtle charms, feasting upon their corpses without breaking a sweat. That sounds plenty terrifying on its own to me, and thus I don’t find the larger than life qualities of later Hannibals all that necessary. I suppose the staying power of Hopkins’ performance is partially reliant on that larger than life aura, because it sticks out stronger in one’s mind than the perfectly realistic, bone chilling performance Cox delivers that doesn’t rely on operatic antics for impact.

Part of what makes Manhunter great is that with it, we are given a film that isn’t reliant on the grisly violence the television series is most famous for. In fact, there’s hardly any onscreen violence at all, the most carefully tame of any Hannibal adaptation, never once gratuitous or overly detailed in the aftermath of violence. Mann is careful to never reveal too much violence, which could easily have turned the film into an unnaturally violent splatter-fest, the lack of which perfectly suits the material and the general themes and tonalites of the film. Instead, Mann cares more about the creation of a sensation of anger toward the killer coupled with the anxiousness and tension within the viewer akin to Graham’s own feeling of these sensations. I think we are meant to feel as though we have stepped into his shoes.

The beauty of the film always manages to catch me off guard more than anything, specifically during a sequence midway through the film when Graham, seated before a rain soaked window, professes his desire to catch the so-called “Tooth Fairy”, arguably one of the films most beautifully realized moments thanks to brilliant cinematographer Dante Spinotti, who also worked with Mann on The Last Of the Mohicans, Heat, The Insider, and Public Enemies. The combination of the psychological nature of the film and the undeniable beauty of Manhunter makes it a very difficult experience to shake. Like other serial killer thrillers such as Seven, Zodiac, American Psycho, and Frailty (to name a few), Manhunter tends to leave a stain on my mind for a little while that no soap known to man could ever wash away, and that’s a good thing in my book. I’m greatly looking forward to seeing this film restored in all its grim glory thanks to the folks at Shout Factory, whose slick new box art for the Collector’s Edition of Manhunter is the second image featured at the top of this review.