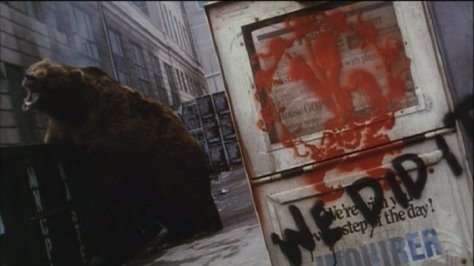 “It’s one thing to get lost in your own madness, but to become lost in somebody else’s madness is weirder.” – Terry Gilliam

How do you know when someone is crazy? This is a question that filmmaker Terry Gilliam tries to answer in many of his films, for he is obsessed by the notion of insanity – what makes someone insane and how do others view this person. Is someone really crazy or do they simply have a different view of the world than the rest of society? In the past, Gilliam’s films have presented characters that tend to blur the boundary between sanity and madness, but perhaps his most complex treatment of this subject is Twelve Monkeys (1995). It is with this project that the filmmaker combines his long standing obsession of breathtaking visuals with his knack for working closely with actors. This combination has resulted in more mature films for Gilliam who is normally associated with stylish overkill: films that tend to let the visuals overwhelm the story and characters. And make no mistake, Twelve Monkeys contains some of the most stunning images you are ever going to see but never at the expense of the story or its characters and herein lies one of the reasons why Gilliam remains one of the most interesting people working in film today.

Twelve Monkeys is a film that constantly plays with, distorts, and more often than not, manipulates time. The film begins in the year 2035. A deadly virus has wiped out almost all of humanity, leaving the survivors to take refuge deep underground. Only the occasional foray up to the surface in protective gear by a select group of “volunteers” offers any clues as to what went wrong. James Cole (Bruce Willis) is one such volunteer who is particularly good at retrieving information. As a result, he soon finds himself being sent back in time to find out how the virus originated and who was responsible. Unfortunately, he goes back too far, arriving in 1990 and is promptly thrown into a rather nightmarish mental hospital in Baltimore where he meets Jeffrey Goines (Brad Pitt), a fellow inmate with a loopy sense of reality that feeds all sorts of paranoid delusions of grandeur. Cole also encounters Kathryn Railly (Madeleine Stowe) a beautiful doctor who feels sympathy for him and his plight.

As Cole travels back and forth in time he begins to realize that one of the most important clues to the source of the deadly virus may lie in the rather enigmatic underground organization known only as The Army of the 12 Monkeys. Soon, Railly and Goines begin to play integral roles in Cole’s search as he consistently crosses paths with them. But is this all taking place in Cole’s mind? Is he really humanity’s only hope at averting a catastrophic disaster or is he just insane? From the first shot to the film’s conclusion we are never quite sure of Cole’s sanity or lack thereof. It is just one of many questions that the audience must think about not only during the film but long after it ends.

The seeds of Twelve Monkeys lie in an obscure French New Wave film called La Jetee (1962) made by Chris Marker. The film was composed entirely of black and white photographs and set in Paris after World War III. It was an apocalyptic vision in reaction to the threat of nuclear annihilation that became prominent in the 1950s and 1960s. Writers David and Janet Peoples were approached by producer Robert Kosberg to do an adaptation of La Jetee. The screenwriting couple wasn’t that keen on the idea, however. “We couldn’t see the point. It’s a masterpiece and we didn’t see that there was anyway to translate that masterpiece,” David remarked in an interview. And he was no slouch to the art of screenwriting, having rewritten the screenplay for Blade Runner (1982) and penned the brilliant Clint Eastwood film, Unforgiven (1992).

Kosberg got the Peoples to watch La Jetee again and the couple began to see possibilities for a different, more detailed take on the material. “How would we react to people who showed up and said ‘Oh I’ve just popped up from the future’ and in turn how would that person deal with our reaction.” With this in mind, David and Janet set out to write a challenging piece of fiction that not only manipulated our conventional views of time but that also dealt with the notion of madness. Janet explained in an interview, “We were very interested in asking questions like ‘Is this man mad? And how about the prophets of the past, were they mad? Were they true prophets? Were they coming from another time? What are all the different possibilities?'” The film’s script argues that certain people who are classified insane by society at large may not really be crazy at all but are in actuality presenting ideas that are way ahead of our time. And perhaps the blame for this misunderstanding should be leveled at the psychiatric profession which, as one character in the film observes, has become the new religion of a society that has deserted traditional faith for modern technology.

After showing the finished screenplay to Marker and getting his blessings, the Peoples were faced with the daunting task of finding someone who would not only click with the material but also have the visual flair that the story needed. The couple figured that the only director to handle such tricky subject matter was somebody like Ridley Scott or Terry Gilliam. The theme of madness that plays such a prominent role in the script fit right in with Gilliam’s preoccupations and so he seemed the natural choice to direct. As luck would have it the filmmaker was between projects and looking for work after several years of seeing potential projects fall through for various reasons.

Gilliam was also eager to take a lot of Hollywood money (a $30 million budget) and create a strange art film that would fly in the face of the traditional mainstream movie. “The idea that someone’s writing a script like this in Hollywood and getting the studio to pay for it was pretty extraordinary. So I thought let’s continue to see how much money we can get the studio to spend.” Gilliam’s battles with Hollywood studios are the stuff of legend – most notably his struggle with Universal over the release of Brazil (1984). They wanted to revoke the director’s final cut privileges to insert a happier ending instead of Gilliam’s decidedly downbeat ending. Gilliam’s vision prevailed in the end, but the ordeal left him understandably wary of further studio involvement. He had reconciled somewhat with Hollywood by making The Fisher King (1991), which turned out to be a surprise commercial and critical success.

Architecture plays an important role in Gilliam’s films and Twelve Monkeys is no different. “I’ve always used architecture as if it was a character.” To this end, he found all sorts of intriguing architecture to populate his film. This included the transformation of an 1820s prison into a 1990s mental hospital where the film’s protagonist, James Cole first meets the Jeffrey Goines. The director found that the structure was designed like a wheel with spokes and hub. And so Gilliam used one section where three spoke-like parts headed off into nowhere. “It seemed to me [that] this trifurcated room was right for multiple personalities.” This feeling of madness is further amplified by the extensive use of skewed, off-kilter camera angles that are often shot at low angles to constantly distort and disorient the scene. “We started doing it and it got more and more fun to see how far we could push it because I wanted to create an atmosphere that you don’t know whether this guy is crazy or whether he actually does come back from the future.” The unusual camera angles not only mimic Cole’s confused state but also reflect Jeffrey’s manic, hyperactive worldview. By presenting the mindsets of these two characters in such a fashion, Gilliam is inviting us to see the world through their eyes and in the process offer a new, unique take on the world that we might not have been aware of before.

Gilliam was not just content to challenge mainstream audiences with unusual visuals and subject matter, but he also wanted to mess with people’s perception of certain movie stars by casting box office names like Brad Pitt and Bruce Willis against type. “One of the reasons [for doing Twelve Monkeys] was taking Bruce and putting him into situations and asking of him things I don’t think he’s ever done before or that people haven’t seen him do … and with Brad Pitt it’s the same thing. Brad is pretty laconic in some ways. Suddenly he’s a blabbermouth, jabbering away at high speed. I love doing that, playing with the public’s perception of that star; otherwise, it wouldn’t be fun.” As a result we get a very different Bruce Willis here than we have come to expect. Gone are the wisecracks and smart-aleck attitude and instead we see Willis impart a real wounded sensibility to the character of James Cole. The reluctant time traveler always seems to be flinching at every little thing, often appearing disoriented or distracted as he struggles to understand what is going on around him. Willis displays great skill in this role – perhaps the best of his career – as he creates a truly tragic figure that may or may not be losing his mind.

Brad Pitt’s character, Jeffrey Goines, resides at the exact opposite end of the spectrum. Where Cole is a sad, brooding figure, Goines is a frenetic psychotic oscillating wildly between paranoid ravings and calm interludes where his madness is kept in check but still resides behind wild eyes. It’s a daring performance for Pitt who lets it all hang out as he gladly chews up the scenery with his loony radical environmentalist cum revolutionary that all but steals every scene he’s in. It’s a performance that Pitt worked long and hard to achieve and it paid off in a Golden Globe Award that year for Best Supporting Actor and an Academy Award nomination in the same category.

It is easy to see what attracted Terry Gilliam to a project like Twelve Monkeys. In keeping with his past films, this one also played “with the same old things – time, reality, madness – so I was intrigued.” Even though it was one of the few projects he did not originate himself, Gilliam quickly made the film his own. In fact, it is Twelve Monkeys‘ unique look that prevents any easy categorization. As Gilliam observed in an interview, “I’m determined to make it indefinable.” It is this avoidance of any clear cut genre that makes the film a riddle waiting to be solved. The film is also structured somewhat like an onion. On the surface, the audience knows very little at the beginning, but gradually as it progresses and the layers are removed, more and more of the mystery is revealed. However, this is not readily apparent after an initial viewing. Only after subsequent screenings does the full impact and brilliance of what Gilliam and his cast and crew have created sink in. It is this great amount of care and detail that has clearly gone into this film that makes Twelve Monkeys worth watching.