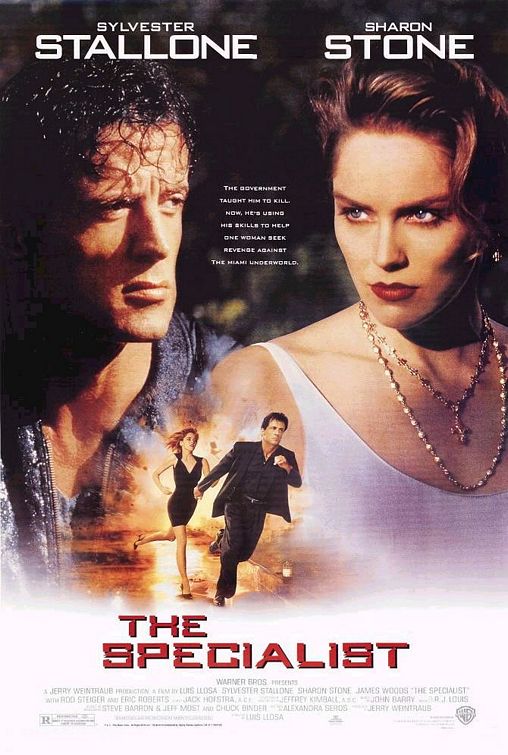 Hollywood has seemingly abandoned the slick and disreputable big budget actioner, and I’m slowly realizing how the 90’s were essentially the last decade that really took full advantage of the big spec-script sale which would then lead into the over-inflated star vehicle. I love The Specialist. It’s obviously not a great movie, but it’s massively entertaining, featuring a trio of bad guy performances from a maniacal James Woods, an extra-sleazy Eric Roberts, and a hysterical and way over the top Rod Steiger. Stallone was rather quiet in this one, as an explosives expert who is drawn into considerable danger by his lusting for a super-hot Sharon Stone, playing Roberts’ trophy girlfriend, while his ties to Woods which stem for their CIA operative days have left them mortal enemies. Stallone and Woods go at each other’s throats all throughout the cliche and predictable narrative, while the epic and gratuitous sex scene between Sly and Stone is one for the books, featuring action in an out of the shower, and more than one moment of laugh-out-loud corniness. The cheese-ball yet extremely plot-heavy script by Alexandra Seros, who also wrote the tepid La Femme Nikita remake Point of No Return for director John Badham, was based on the novel by John Shirley, and has all sorts of terrific howler lines as well as some really nasty tough-guy talk, while the entire production was overseen by legendary producer Jerry Weintraub.

The action, all well staged by famous B-movie filmmaker Luis Llosa (Sniper, Anaconda, various Roger Corman titles), is slick and violent and explosion-happy, with the entire film given a phenomenally luxurious yet still gritty visual veneer by the tremendous cinematographer Jeffrey Kimball, who shot Top Gun and True Romance for the late, great Tony Scott. Every single shot in this film is gorgeous, with Kimball lighting the radiant and ultra-sexy Stone like a true cinematic Goddess, while the Miami setting at least allowed for the excuse to lather all the stars in faux-sweat and body oil, all in an effort for maximum gloss. Jack Hofstra’s tight editing kept a fast pace and the entire picture was bolstered by John Barry’s exciting score. A decent hit at the domestic box office but totally trashed by critics who couldn’t be bothered to see the film for what it is — a good old stupid-fun time at the movies — this is one of those mid-90’s efforts that signaled the downturn in American interest in Stallone’s output, but would become a massive financial success overseas, just as almost all of his films have been. While certainly not revolutionary on any level, this is a solid and undemanding time waster that I’ve watched repeatedly throughout the years, and it’s a reminder of how tame and prudish the studios have become with their inclusion of violence and sex in pop-corn action fare.