“Why weren’t you in the pros making stacks of cash and getting your toes licked by beautiful women?”

This line of dialogue from Shyamalan’s Signs always springs to mind when I think of the man and the career of Sandy Collora – and I told him as much. I have watched as filmmakers of lesser skill, passion and moxie rise and rise again with relative ease through the ranks of the Hollywood system.

But, while it boggles the mind as to why a man of Sandy’s talent has thus far been denied a shot to bring his truly awesome visions to fruition – his career has not been without triumphs. He has worked on some truly cool pictures like The Abyss, The Crow and Men in Black; along the way enjoying the benefits and encouraging tutelage of such luminaries like Stan Winston and Henri Alvarez. 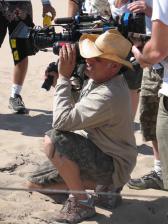 Then came that little fan film you may have heard of, Batman: Dead End. Not only was it a game-changer, but it was also a life-changer, propelling Sandy into a league of his own and catapulting him toward the attention of the Hollywood players.

I referred to this period as Sandy being romanced by the industry. He refers to it differently. But he concedes that mistakes where made, and what might have been is anyone’s guess had he played the game by their rules.

Still the testament of all great artists that we applaud still, no matter the length of time it has been since they delivered unto the world their masterworks, is a resolve born of (in some ways) uncompromising vision and unshakable self-confidence. And, while Sandy freely admits the art of compromise will be necessary, if he hopes to realize his works on a larger scale, he (I hope) shall not lower his standards below that which work of his quality richly deserves.

Hunter Prey gave us a taste of feature-length Collora, and now he is at it again with his dynamic and compelling short, Shallow Water.

A new beast emerges, and with it comes the prospect of the reawakening of a genre made famous by its creatures like Alien and the Predator. It also marks the opening of another door for Sandy to, at last, the big time – a place in which he has fought hard to attain and worked tirelessly to offer some exuberance and, no doubt, something extraordinary. 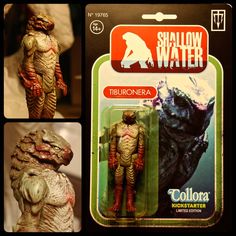 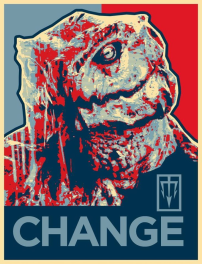 There are so many great stories of great stories that have been a part of the life and cinema of Sandy Collora. I encourage you to check out the link below; find yourself a copy of, not only his incredible art books, movies and merchandise, but also the inspiring documentary: Behind the Mask.

Grand adventures, heartbreaking turmoil; this is the agony and the ecstasy, but also the the wisdom and the wonderment of the Collora cinematic universe. Dear listeners, it is my pleasure to present . . . Sandy Collora.