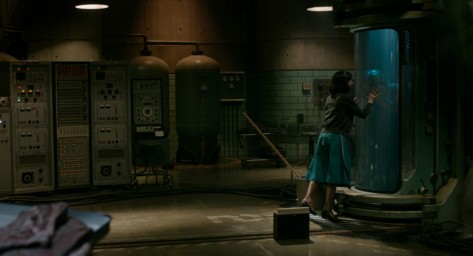 Guillermo del Toro makes beautiful films, let’s just make that clear. His craft is impeccable. With a variety of collaborators he has created some of the most brilliant productions, sets, and practical effects in all of modern cinema. Here he blends practical and computer generated effects better than any film I can think of (I think he’s still trying to redeem himself for that awful CG fight in BLADE 2).  His massive monster muse Doug Jones, who has been featured under heavy make (yet still somehow always recognizable?!) in six of del Toro’s eleven features, creates a performance that is hard to judge because of this mixture. The creature this time is credited as both “The Asset” and “Amphibian Man” and really has to be seen to be believed. The obvious inspiration is, which del Toro heartily acknowledges, THE CREATURE FROM THE BLACK LAGOON, but del Toro and his crew go beyond simple movie monster and create a character of depth and sympathy, so much of which lies in its eye, as is the case with all film performance. These eyes are fixed black orbs but the blinking is all CG. Given this is a story of two mute characters, Sally Hawkins’ Elisa was injured as a child, the importance of their eye contact cannot be understated. Make no mistake this is an inter-species love story, complete with consummation, so if at any point we stop believing the reality of the creature, the whole thing falls apart. Because of the great effects and both legitimately wonderful performance we believe every moment: the “meet cute”, the courtship, the physical attraction, all of it. Unfortunately not all the other performances, or characters, live up to this standard.

Michael Shannon can do menacing while sipping tea and reading Better Homes and Gardens. It’s just his thing. Here his does MENACE! Or more specifically GOVERNMENT MENACE! and it’s all cartoon and caricature. You believe he’s scary, you believe he is dangerous, you just don’t believe he’s human. Octavia Spence suffers a similar fate as SUPPORTIVE FRIEND! This wouldn’t even be an issue if the film was a strict fantasy. Hell, I love watching actors find nuance in timeworn character types. For my money one of Michael Shannon’s best performances is as MENACE WITH A BADGE! in David Koepp’s underseen, highly entertaining PREMIUM RUSH. But I digress. I should clarify “strict fantasy” I think. I’m obviously not referring to elves and fairies and what have you. What I mean is a story set sort of out of time, where things are, in varying degrees recognizable, but not really discernable in regards to era and sometimes locations, and often distorted or exaggerated. EDWARD SCISSORHANDS and SEVEN are a couple films that leap to mind. But THE SHAPE OF WATER goes out of its way to place in a very specific time: American in the 1965. How do we know this? Because at one point Elisa is at her neighbor Giles’ (Richard Jenkins) apartment and she turns on the television and we see footage of the Selma marches. More specifically we see violence against the marchers. I can’t recall if it was them being hosed or attacked by dogs, it is only a brief glimpse. Giles, who happens to be gay, reacts by waving his hands and insisting that Elisa “turn it” and that he “doesn’t want to see this.” Elisa turns the channel to a musical and Giles sits down responding “isn’t that lovely.” I have never in my life felt the energy sucked out of a theater like I did at that moment. I saw this on a Tuesday morning with a full theater and diverse audience and I don’t think there was a single patron that didn’t either gasp or groan (I was a groaner). It is a callous and inexplicable moment, particularly when you consider the film is supposed to be a metaphor for inequality and forbidden love. Pro tip (ok, fine, amateur tip), when creating a cinematic metaphor don’t  put it directly next to images of real people with real struggles, and if you must then for fuck sake don’t treat that image like someone just put a plate of something disgusting in front of you. It is rare that a single, quick moment like this can deflate an entire theater but there was definitely a marked difference in my audience after this. No one reacted to much else for the remainder of the film, except another groan during a scene where, believing he has a mutual attraction, Giles, hits on the cashier at a local pie store (were there really pies stores in the 60s?), but has taken the cashiers customer service training as affection and is promptly told to leave, but kicking him out is not enough, as he is being asked to leave an African American family enters and is also kicked out.

The story moves on, the plot unfolds, but the magic has gone. The metaphor, which had been working, seems flippant and petty by comparison. The rest of the film is basically a well-staged heist film with Amphibian Man as the ultimate prize. Elisa enlists her friends and a Russian spy (Michael Stuhlbarg) whose character I won’t even get into but to say that it is a character that the film doesn’t know what to do with or how it wants us to feel about him. He’s Russian so he has to be coded “bad guy” but he’s also the only person outside her immediate circle who sympathizes with both Elisa and The Asset. There’s a complexity to his motivation that could have really been interesting to explore but instead his stand alone scenes feel more like cut-aways to a different film, the international intrigue and cold war representation a pointless sheen over the bizarre love story that is the heart of the film. Bizarre and otherworldly is where Del Toro shines. Not just in this film but throughout his career it has always been the fantastic that he seems most comfortable with, but it is only here where I’ve felt the real world setting a crutch to his story and themes. He should have let these two beautiful characters do their dance and trusted his audience to understand the metaphor.