As the child from a working class family in South Bend, Indiana, Larry was introduced to the movies by his father. He was not restricted as to what he could watch, so he watched it all. After high school he debated between pursuing either a career in comedy or a life in pictures. 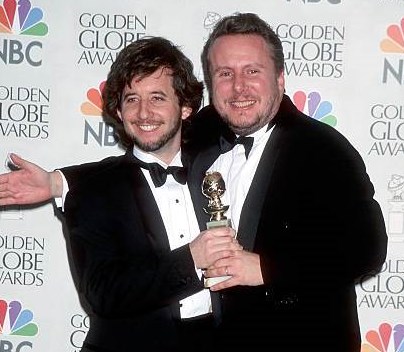 Larry opted for the movies, and soon found himself at USC. It was there that he would meet Scott Alexander, and together they would form not only a friendship, but also the foundation of a prolific career as a successful screenwriting duo.

After (and though it launched a trilogy of films and even an animated series) Problem Child, the screenwriters struggled to find work. It seemed as though they had been typecast buy their work and so looked to independently produce a biopic they were working on about the notoriously bad filmmaker Ed Wood.

As fate would have it, word of the project reached director Tim Burton. After expressing interest, the boys would have to hammer out a screenplay in double-quick fashion. They succeeded, and this, the first in a string of biographical efforts, would re-establish them in Hollywood and from it they would carve out their place in the genre and become, in many ways, its ‘go-to guys.’

Biopics of Larry Flynt and Andy Kaufman would follow, seeing the boys team up with Academy Award winner Milos Forman. They would go on to re-team with Tim Burton as well as dabble in a variety on different genres including everything from a kid-friendly version of James Bond to horrific hotel rooms were you’ll spend a night or perhaps even an eternity.

Larry and Scott have garnered the highest accolades the industry has to offer and continue to deliver. While trying to get a hold of Larry for this interview I caught him riding high on his recent wave of success, so I would just have to wait for the tide to turn. I am however, glad that I did. It was, as it is ever, a privilege to chat with a man whose work I heartily admire. I love the films he has written and I look forward to the projects that he and Scott have in the pipeline.

Without further ado I present, the award-winning screenwriter and all-round nice guy . . . the one, the only, Larry Karaszewski.

Other than Pee Wee’s Big Adventure and Beetlejuice, Tim Burton’s Ed Wood is my “favorite” film from this phenomenally adventurous and eccentric filmmaker, but I think it clearly stands as his “best” piece of work to date. Working with the invaluable screenwriting duo of Scott Alexander and Larry Karaszewski (Man on the Moon, The People Vs. Larry Flynt, the upcoming original FX series American Crime), Burton was able to craft a black and white ode to a Hollywood of yesteryear, and because the ingenious screenplay bucked the traditional notes of the conventional biopic, the film takes on a more layered feel and structure, examining not only Wood the director but Wood the man and Wood the mystery, as well as stopping to consider all of the colorful people who surrounded his bizarre life. Shot by the great cinematographer Stefan Czapsky (Batman Returns, Edward Scissorhands), it’s one of the rare modern movies to get the studio approved monochrome treatment (after switching homes from Columbia Pictures to Disney/Touchstone), but let’s be honest, there was NO other way to present this material; this is one instance where the content dictated the style, and not the other way around. Johnny Depp was marvelous in the picture, easily giving one of his greatest performances as a man caught in eternal confusion, both personally and professionally, never truly understanding his place in society or how to grasp all of the straws around him. Some of these themes would be later explored by Burton and Alexander and Karaszewski in last year’s underappreciated (at least by theatrical audiences) art world exploration Big Eyes, which featured a splendid lead performance from Amy Adams. The dynamic supporting cast includes Oscar winner Martin Landau, giving an unforgettable performance as screen legend (and notorious drug addict) Bela Lugosi, and also featured terrific turns from a pensively hilarious Bill Murray, the always awesome Patricia Arquette, an exasperated Sarah Jessica Parker, Mike Starr, Vincent D’Onofio, Max Casella, Lisa Marie, and G.D. Spradlin. The film opens with a charming and creative opening credit sequence evoking all of Wood’s disasterpieces, with Danny Elfman’s imaginative and playful musical score setting the tone early on. The film would receive overwhelming critical praise and also garner two Oscars, one for Landau for Best Supporting Actor, and the other for make-up artist Rick Baker. Alexander and Karaszewski would receive a WGA nomination for Best Original Screenplay. Despite not attaining box-office success in theaters, Ed Wood has lived on as one of Burton’s most respected and mature films, a piece of work that feels extremely personal and incredibly generous in spirit.