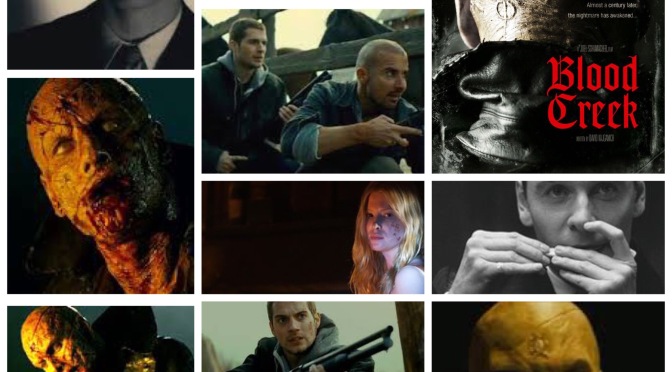 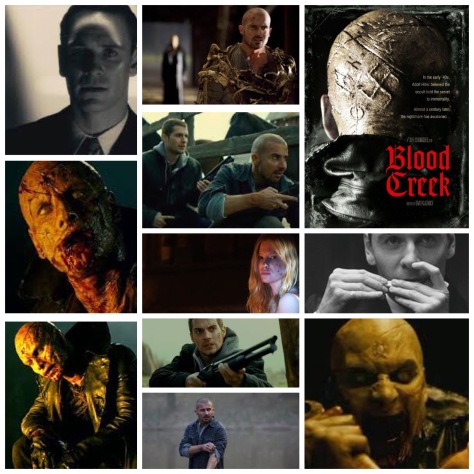 A Joel Schumacher helmed horror flick starring Michael Fassbender as a deranged, occult obsessed Nazi zombie vampire, hunted by Lincoln Burrows from Prison Break. Sounds like a flick from an alternate dimension that doesn’t exist, right? Well it’s out there, tough to find as it was somehow buried around it’s 2009 release, and relegated to a relic before it was even a decade old. Shame, because it’s a ton of warped, bloody fun. Officially titled ‘Blood Creek’ on iTunes, it can also be found as ‘Town Creek’ or simply ‘Runes’ elsewhere, but like they say, a rose by any other name. Fassbender is all kinds of scary in a black and white prologue as a Nazi occult agent who shows up at a rural American farm to study ancient Nordic runes which may hold the key to resurrection of the dead. His chilling work initially is nothing compared to the balls-out, gory makeup covered incarnation he gets to prance around in later though. In present day, two brothers race into the foggy backwaters to stamp out this evil, and they’re played by an intense Dominic Purcell, as well as Superman himself, Henry Cavill. Not a whole lot of time is spent on character development for all involved, the film choosing instead to jump headlong into a notably gory free for all, banding together with the poor German family who has had to deal with this psycho for almost a generation on their farm. At a crisp ninety minutes, there ain’t much time for anything but action and gore, with a few scarcely scattered, breathless moments of exposition that were already made clear in that prologue, the one interlude of the film that isn’t soaked in adrenaline. Hats off to Fassbender under all that chatty, gooey makeup, his physicality is really menacing, and who else gets to play a Nazi vampire zombie who pounds a metal stake into his own forehead to make room for an emerging third eye? Truly a villain for the ages, had the film been allowed to gain any notoriety. And what other film can boast a sequence in which Purcell eagerly blasts zombified, rabid horses with a shotgun, chunks flying all over the barn? Such are the levels of disturbed imagination on parade. Poor Schumacher though, really. This would’ve been his first good film in awhile back then, and the studio goes in for the kill on every single marketing front, not even giving it decent room to breathe on DVD. At least it’s still floating about on iTunes, where any horror fan would be rewarded with a rental. 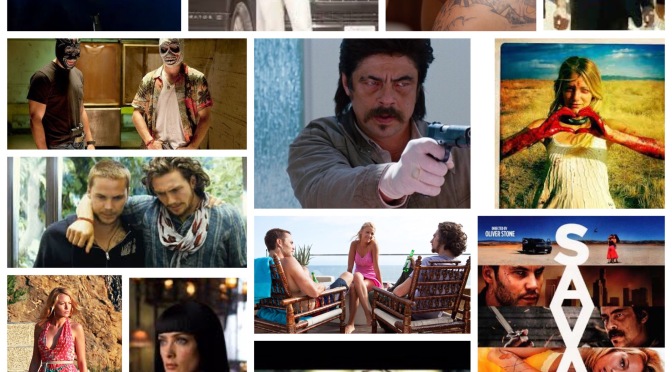 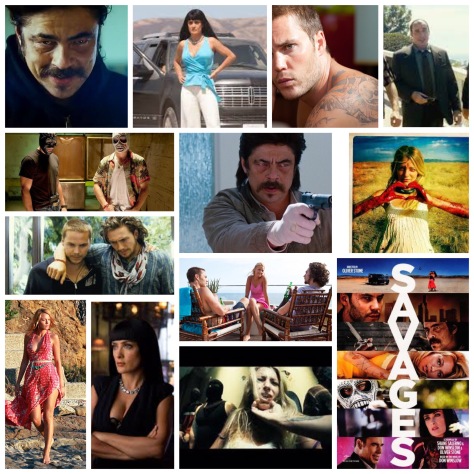 Oliver Stone’s Savages is the best film the man has made since the early 90’s, and reminds us of what colourful, bloody, hectic, Mardi Gras shock & awe blistering good times the man is capable of bringing us. His political/war films are all well and good, but for me the lifeblood of this filmmaker lies in his sun-soaked pulp n’ noir toolbox, the ability to spin grisly, darkly romanticized genre campfire yarns that exist eons away from the geopolitics of our plane. Savages is so whimsical it could float right out of our grasp on a cloud, if it weren’t so heavy and heinous at the very same time, and it’s in that careful balance of heart, horror and humour that the film comes out on top, despite a relative cop-out of an ending that can be forgiven when the package as a whole is considered. Based on a novel by Don Winslow, this is an odyssey of cartels, violence, love most pure, drugs, guns, California dreaming and a cast having more fun than they have so far in their collective careers, and I do mean that. The film opens with grainy, harrowing camcorder footage of sinister cartels beheading innocents to set an example, and that’s just the start of it. Pan over to Cali paradise where angelic Ophelia (Blake Lively in a beautiful, vulnerable performance) lives with the two loves of her life, gentle hippie Ben (Aaron Tyler Johnson) and hardened Afghan vet Chon (Taylor Kitsch), two brotherly marijuana barons who provide the west coast with the finest bud the region has to offer. They live in harmony, both in love with Ophelia, existing as a functional little romantic trifecta tucked away on the sun-dappled coastline, until darkness finds them in the form of the power hungry Baja Cartel, who want a piece of their impossibly lucrative action. Although spearheaded by a fiery Salma Hayek, it’s Benicio Del Toro’s Lado who strikes fear into hearts, a ruthless, casually sadistic enforcer who’s not above the lowest brands of violence and degradation. Del Toro plays him with a knowing sneer and a grease-dripping mullet, a positive scourge of everything pure and good in his path. Ben and Chon are thrown into a world of hurt when he kidnaps Ophelia, held as a ransom so the boys play ball with Hayek’s plans for aggressive expansion, promoting all out guerrilla war-games between both factions. John Travolta does his wired up thing as a cheerfully crooked DEA underboss who is their conduit to all things intel related, and Emile Hirsch their surveillance expert. This is a film of both bright light and terrible darkness, and it’s easy to get swept up in the hypnotically wistful current before the film turns evil loose and gut punches it’s audience. The visual tone is crisp and endlessly colourful, and Dan Mindel’s cinematography doesn’t shy away from the overt nature of the brutality, especially when Hayek’s right hand accountant (Damien Bechir) is gruesomely tortured by Lado, and during a daring highway ambush that showcases both Chon’s merciless tactical resolve and Ben’s fragility, both driven to staggering extremes by their love for Ophelia. Stone has always had a flair for eye boggling excess, dastardly deeds done under a baking hot sun and garish, over the top characters that would be right at home in a cartoon if they weren’t so tangibly present, especially in Del Toro’s and Travolta’s cases, it’s a beauty of a thing to see them both chow down on the scenery here and riff off of each other in a quick scene where they share frames. Many folks were underwhelmed by the work of the three young leads, but they couldn’t have been better, really, especially Lively, who’s wounded soul brandishes a sword and shield of sunny disposition even when faced with utter hopelessness, a lilting poetry to her hazy narration that threads the tale together in fable form. Commerce is chaos here too, as we see how the south of the border drug trade encroaches on many individuals who don’t yet understand the evil emanating from that region, and are rudely awakened. There’s so much going on in this film, it’s so vibrantly alive in every facet, a showcase example of the bruising, beautiful power that movies have over us.