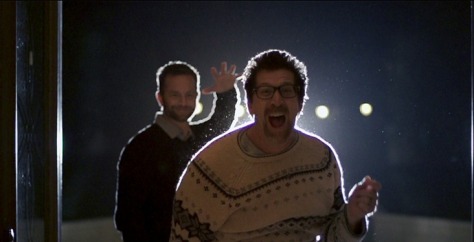 As anyone named Kirk Cameron can tell you, Kirk Cameron’s got it all figured out.  A faded sitcom star from the 80s, he’s remade himself into something of a one man cinematic cottage industry; thanks to an aggressive religiosity he’s pumped out a variety of ‘films’ that are light on things like acting and production value but heavy on evangelical finger-wagging.  His smug mug is actually the perfect front for a denomination known for a general tenor of “I’m right and you’re wrong” moralizing and agonizing mental gymnastics applied in the service of proving the Bible to be an inerrant history of civilization.  I’m cautiously optimistic that his wins—previous film Fireproof brays that it’s “the most successful independent movie in history!” on the DVD case—will result in some right wing sugar daddy bestowing a few million on him that results in cavemen riding dinosaurs across the silver screen, but until then we are left with the no budget likes of Kirk Cameron’s Saving Christmas, a holiday classic in only the loosest sense of the term.

Kirk Cameron’s Saving Christmas is actually a narrative film in only the broadest definition of the form.  Our hero starts the proceedings by directly addressing the audience in his best Bing Crosby mode, fireside and pontificating about the complexities of rectifying the Christ in Christmas with the supposed pagan trappings that the holiday has picked up over the years.  We’re then introduced to Cameron’s brother in law, toting the leaden name Christian, of course, and told he hates the crass commercialization of this most serious of holidays (most theologians worth a crap would tell you that Christ’s resurrection, celebrated on the equally heathen-stained Easter, is actually the one you should keep your eye on).  He marches out of a Christmas party set in a bland suburban McMansion and populated with an ethnically diverse group that doesn’t appear to actually know each other to pout about all of this in his car.  Kirk follows him out to set him straight with 40 minutes of bizarre speechifying.  The good news is that viewers who find themselves flummoxed by complicated plots can ease right into this low mileage beauty and hit the road; there’s actually no story, so to speak, aside from what I’ve described.  We are treated to about two scenes of what might be considered a subplot with a jive-talkin’ co-worker of Christian’s who is about two steps up from a full blown minstrel show, but otherwise it’s just Kurt explaining away Christmas trees and Saint Nick as righteous biblical figures, wholly appropriate to the message.  It’s a bizarre exercise, delivered with relentless sincerity, weak stabs at humor and no attempt to actually entertain the audience.

Before you know it, 55 minutes have passed and Kirk’s run out of sermon, and out of movie.  The pair pull themselves back inside for an extended dance sequence and a bit more speechifying to drag the exercise towards something approaching feature film run time, but nobody’s fooled.  While I don’t begrudge anyone their faith or their right to make a living, Cameron and his cohorts have left a rather large stain on the venerable holiday film genre, much as his Left Behind series did on the disaster flick and Fireproof on the romance movie.  It’s not an understatement to call Kirk Cameron’s Saving Christmas a war on film itself, and I can only recommend its viewing if alcohol and sarcastic company are both in plentiful supply.