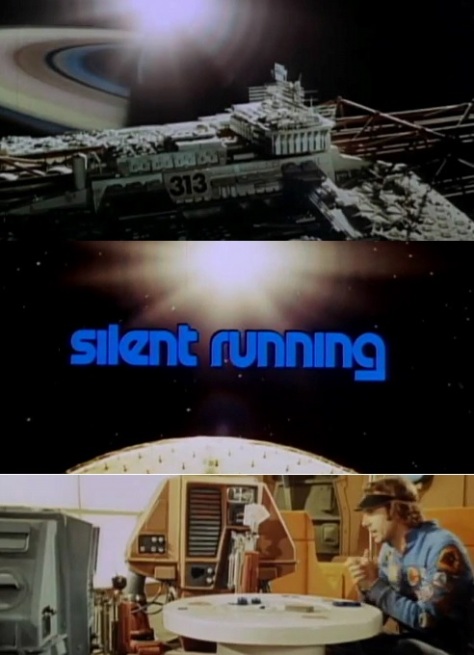 A triumph of imagination more than overall execution though certainly not without more than one sequence of bravura filmmaking, Douglas Trumbull’s ultra-ambitious sci-fi oddity Silent Running is a relic of 70’s cinema, made clean again by the advances of modern day Blu-ray technology. Back in the day, I would passively watch this movie on cable with extra-wide-eyes as a youngster, but seeing it now, I’ve realized how ahead of its time the central message was, and how interested it was in character and personality rather than needless action or explosions. Trumbull, the special effects guru who assisted Stanley Kubrick on 2001: A Space Odyssey, Terrence Malick on The Tree of Life, Steven Spielberg on Close Encounters of the Third Kind, Ridley Scott on Blade Runner, and Robert Wise’s Star Trek: The Motion Picture and The Andromeda Strain, was and still is a pioneer in the art modern special effects and in-camera photographic techniques, and he was given the chance by Universal pictures to create something entirely his own (albeit on a ridiculously low budget of $1 million dollars!). You can tell that he’s not the world’s greatest director, and while Bruce Dern’s performance is certainly passionate and committed, I don’t think it’s a stretch to say that Trumbull wasn’t an “actor’s director.” But what Trumbull may have lacked in experience he made up for in the creativity and style department.

After drafting a treatment for Silent Running, screenwriters Mike Cimino(!), Steven Bochco(!), and Deric Washburn(!) fleshed out the screenplay, which centers on the idea that sometime in the future, all the world’s plant life has become extinct, with the last remnants preserved and sent out into the solar system inside massive geodesic bio-domes, complete with animal life and fresh water, in the hope that one day they can be returned to Earth and life can again become sustainable. The film takes an anti-corporate slant when Dern, the ship’s constantly sweating botanist/scientist/astronaut, defies the orders of his greedy superiors who want the environmental experiment terminated in favor of sending the massive ships back into money-making routines. Dern commandeers his ship, fights it out with the other scientists, and blasts off for the rings of Saturn, all with the help of three robots who appear to be prototypes of TARS and CASE from Christopher Nolan’s Interstellar.

After evading the enemy, Dern keeps the ship out of contact, hence the title Silent Running, and tries to keep the forest life in the bio-dome up to speed with the robots acting as his helpers. The film then turns into something more quiet and introspective than I ever remembered, with Dern making a perilous journey through Saturn’s rings (shades of 2001 here galore), and then learning that his reforestation idea may not be attainable because of limited resources aboard his ship. He also develops an interesting relationship with his robot buddies. The limited budget shows in many areas, but when the ideas are this interesting and at times profound, I can excuse the lack of slickness in some of the technical departments. And considering the age that this film was crafted during, and with such a small budget, the film is something of a miracle. Nolan CLEARLY must love Silent Running, because he totally cribbed from this film (and from The Right Stuff) while making his magisterial science-fiction epic Interstellar, and it’s awesome to see that Trumbull’s work has continued to inspire a wide variety of current filmmakers.