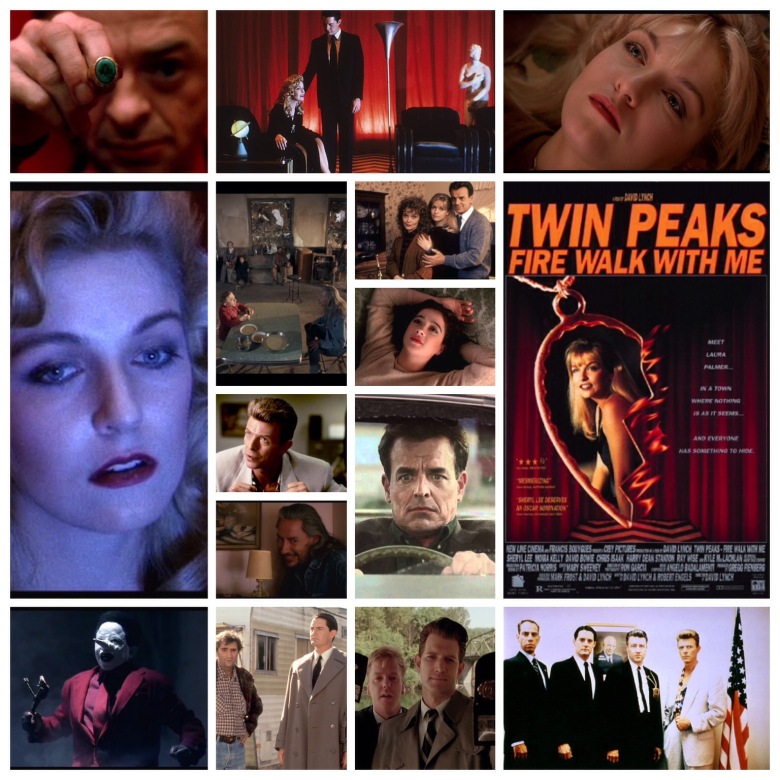 David Lynch’s big screen prequel/sequel to his television phenomenon Twin Peaks departs from the shows light, kooky and benignly eccentric sensibilities. It starts at the more surreal, dark atmosphere which sometimes materialized in the show, especially in the last episode, and plunges headlong down a rabbit hole of sex, murder, mysteries, federal agents, parallel universes, psychological torment, otherworldly spirits, supernatural phenomena, incest, more cups of coffee (Im not even kidding, there’s a scene where a stressed out looking Harry Dean Stanton makes a ‘cup of good morning America’), and above all, Laura Palmer. The beautiful, mysterious homecoming queen we only saw as a corpse in the series comes to wild, screaming life in this film, and what a performance from the gifted Sheryl Lee. She perfectly captures the menace, hurt, confusion, hope, torment and wild desperation of Laura, in a towering, stunning performance. Ray Wise is equally magnificent as Leland Palmer. Angelo Badalamenti switches up the tone as well, letting the beautiful Laura theme and the classic Twin Peaks tones only play in limited, selective fashion. His theme for the film is a powerfully dark, otherworldly melody which lulls you right into the film’s deep velvet grasp and haunts you in ways you can’t describe. The angel of the Roadhouse, Julee Cruise, gets another tune to croon as well, and it might just be my favourite of the bunch. Laura tearfully looks on as Cruise intones ‘Questions In A World Of Blue’, a transfixing lament that seems to be meant for her alone. Lynch is a true master of the subtle touch, and you’d have to read many an online forum as well as watch the film and the show several times to pick up on all the hidden implications and shrouded ideas that aren’t readily presented to you in a traditional narrative. That inaccessibility and refusal to play by the rules by serving things straight up is difficult for many people to get their heads around. To me though it’s such a fascinating way to tell a story. He doesn’t necessarily leave everything open to interpretation, he just hides the answers in a bewitching blanket of surreality, subtlety and dream logic, challenging the viewer to think using the unconscious mind and intuition to feel your way through the story, as opposed to tallying up facts and plot turns to analytically arrive at your cinematic destination. Perhaps this is why he meticulously oversees many of the DVD releases for his films, leaving out scene selections and unnecessary bells and whistles. The story matters most to him, in singular, unbroken form, a segment of his soul encapsulated on film in one cohesive effort, like a dream caught unawares by the lens. Fire Walk With Me was unfairly bashed, booed and downright critically clobbered for its stark and outright changes from the shows lighter tones, as well as its leaving out of some of the more popular characters that fans loved. Although this is jarring, I feel like Lynch has distilled all the elements in the show that mattered the most to him, and woven a gorgeous, seductive tapestry of pure Twin Peaks ‘feel’ and spectacle, as a loving gift to the fans who truly get it and are open to the wilder ideas explored briefly in the show. The film expands greatly on the ominous Black Lodge, and it’s dwelling spirits, including the strange Tremonds, the one armed Mike, and the little red suited Man From Another Place. The killer demon Bob is very prevalent in this film, and if you thought he was scary in the show, well.. His scenes in this are downright soul shatteringly. Moira Kelly makes a softer, doe eyed version of Donna Hayward, which I quite liked. Miguel Ferrer returns as the cynical wise-ass Albert, Lynch as the hard of hearing FBI boss Gordon Cole, as well as Heather Graham, Grace Zabriskie, Eric DaRe, Madchen Amick, Peggy Lipton, etc. Newcomers to the Twin Peaks mythology are great as well, including Chris Isaak and Kiefer Sutherland as more FBI agents investigating the case of Teresa Banks in Deer Meadow, Jurgen Prochnow as a trapped soul in the spirit world, and a confused looking David Bowie as an agent who has been mired in the time bending fog of the spirit world long enough to render him brain fried. It’s a love letter to the fans, really, but one that doesn’t compromise an inch and is every ounce a Lynch picture, capturing the director at his most creative adventurous. He strives to plumb the depths of human behaviour and the forces beyond our perceptions which govern and influence from other planes. Seeing these tricky themes explored so rawly in a film based upon a TV show that had heavy roots soap opera and an often lighthearted tone only garnished with the disturbing elements in the film can be hard to swallow, which is no doubt the reason for the sour reception upon release. The film has stood the test of time and aged wonderfully though, seen by many grateful, loving fans as a dark dream straight from the heart, and a perfect film. If one is willing to accept the changes in tone and ambiguous, challenging nature of Lynch’s storytelling (which I love!) then Fire Walk With Me is a sumptuous, gorgeous looking, vital piece of the Twin Peaks world, and in my mind Lynch’s masterpiece.