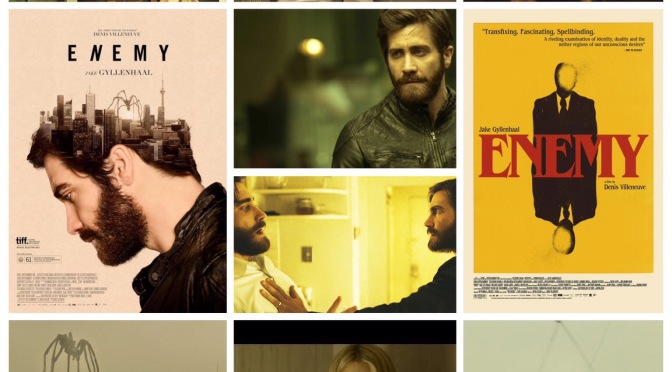 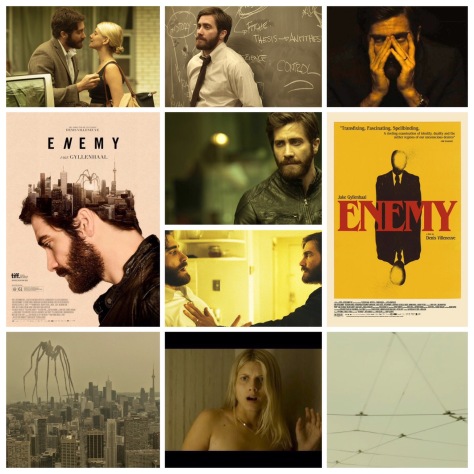 Denis Villeneuve’s Enemy is one of the most unsettling film experiences you will ever sit through, and the damn thing is only 90 minutes. It’s disconcerting, ambiguous and seems to exist simply to spin the viewer’s anxiety reflex into a storm and make our stomach turn loops. It’s a trim entry into the psychological upset sub genre, and puts a frazzled looking Jake Gyllenhaal through a wringer as he pursues a mysterious doppelgänger through the streets of Toronto, a bustling city that feels oddly desolate as glanced upon by Villeneuve’s camera, adding to the themes of paranoia and mental unrest. Gyllenhaal plays a twitchy college professor who is stuck in a closed loop routine: he gives lectures at the local university, drives home to his emotionally inaccessible girlfriend (Melanie Laurant), rinse and repeat. A chink appears in the chain when he becomes aware of another man in the city who appears to be his identical twin. The other man is a small time actor with a pregnant wife (Sarah Gadon) and a decidedly more nasty approach to the situation than the professor. The two of the, circle each other in a disturbing game of not so much cat and mouse, but Jake and Jake, both of them having not a clue as to what is going on, the edges of madness inching closer to both of their perception. Are they twins? Are there even two? Is it just one of them, losing their mind? There’s very freaky dream sequences with the constant imagery of spiders, both large and small, and what do they mean? Who’s to tell? Denis has stated in interviews that there is both rhyme and reason to his creation here, but whether he will ever divulge them remains to be seen. Perhaps it’s better left illusory, a formula for entrancing audiences that has already proved to work well for David Lynch. The moment that the man behind the curtain reveals the conscious meaning of his very subconscious efforts, the spell is no doubt broken. In any case, it’s a very hard film to process or focus on, our nerves jittering constantly and sabotaging any modicum of rational though that we might employ in deciphering the piece. This may be called style and atmosphere over substance by some, but even in not comprehending what’s going on, we feel deeply that there is some sort of cryptic cohesion if we are able to feel between the lines, maybe coming up empty handed ultimately, but knowing within us that we’ve attained wealth to our soul simply by bearing witness. I can’t say it’s a film that I love, or that I would watch again, but it’s certainly one that won’t leave my memories any time soon, and that is an achievement no matter how you look at it. It’s also got one of the scariest and most unexpected endings to any film I’ve ever seen, taking you so off guard that you feel like you’re going to have a coronary. It’s filmed in sickening piss yellow saturation which adds to the overall disconcerting nature, and quite the striking colour choice as well. I can see why this one was released with little fanfare or marketing, despite the presence of heavyweights Villeneuve and Gylenhaal. It’s difficult stuff, a movie that frustratingly soars above your head, onward towards its intensely personal and psychological destination. It’s up to us to jump, grasp and attempt to reach as high as the piece in order to get what we will out of it. Good luck.