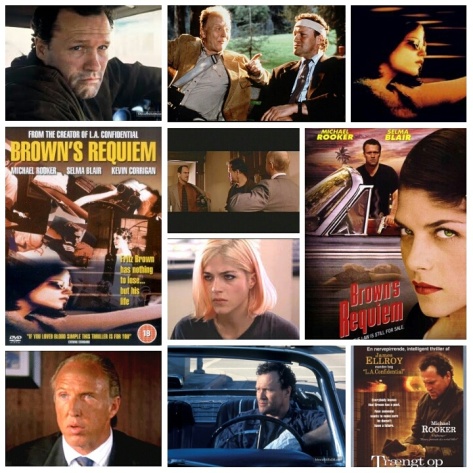 Brown’s Requiem is a neat little slice of Los Angeles film noir in the tradition of L.A. Confidential and Mulholland Falls. It’s based on a book of the same name that’s written by James Ellroy, who actually wrote L.A. Confidential as well, so the crime vibe here is thick, rich and geniune. Michael Rooker is flat out fantastic as Fritz Brown, a world weary, hard bitten private investigator who is hired by a rotund caddie named Fat Dog (Will Sasso) to find his kid sister (Selma Blair) a wayward girl who has apparantly run off with a her sugar daddy, and may be in danger. Brown noses around and before he knows it he’s neck deep in police corruption, violence and murder. It’s convoluted, but film noir always is, and when the plot is left to bake in the California sun, it’s going to be nicely sinewy and labyrinthine to please all the filmgoers put there who fancy themselves gumshoes and like to decipher the happenings along with the protagonist. The trail leads Brown to sinister police captain Cathcart (the late Brion James), brutal thug Richard Ralston (Jack Conley) and many other bottom dwelling nasties. This is a rare lead role for Rooker and he’s riveting, fitting this genre protagonist like a glove. His innate menace and gruff whisper of a voice are put to good use as the hangdog tough guy takes care of business in style. Watch out for Kevin Corrigan, Tobin Bell, Christopher Meloni and a brief but darkly funny cameo from Brad Dourif. Where L.A. Confidential hid it’s grit beneath a sheen of glamour, Brown’s Requiem wears it proudly on its seedy sleeve, a scrappy little cousin to Confidential, and a sturdy little noir mystery boosted by Rooker’s work.