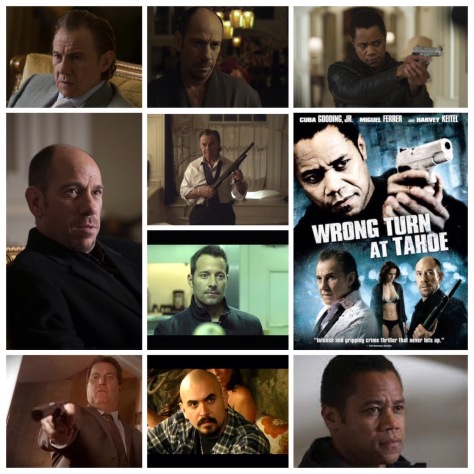 I’ve been ragging a lot on Cuba Gooding Jr. The past few reviews, so I’ll go easy and speak about a good one instead. Wrong Turn At Tahoe has a script that should have been given the royal treatment; it’s wise, brutal, thought provoking and very violent, with many sets of morals clashing against each other in true crime genre style. It didn’t get a huge budget or a lot of marketing, but what it did get was a renakably good cast of actors who really give the written word it’s justice, telling a age old story dangerous people who inhabit the crime ridden frays of both society and cinema. Cuba plays Joshua, a low level mafia enforcer who works for Vincent (Miguel Ferrer), a ruthless mid level mobster who runs his operations with an OCD iron fist. He also rescued Joshua from a crack house when he was a young’in, forging a father son bond that runs deeper than terms of employment. When a weaselly informant tells them that local drug runner Frankie Tahoe (Noel Gugliemi, reliably scary) has it in for them, Vincent brashly retaliates first by viciously killing him. That’s where the shit starts to get deep. Frankie was an employee of Nino (Harvey Keitel) that most powerful crime boss on the west coast and not a man to cross. Nino Wants hefty payment for the loss of Frankie, who was a good operative. Vincent, being the proud and belligerent son of a bitch that he is, bluntly refuses. So begins a bloody, near Shakespearean gang war in which both sides rack up heavy losses and the phrase ‘crime doesn’t pay’ collects it’s due. All parties were inevitably headed to a bitter end whether or not the Tahoe incident occurred, and I think the writer simply used that inciting incident as an example of many ways in which a life like that will always end up at a dead end. The writing is superb, especially for Gooding, Keitel and Ferrer, a vicious triangle indeed, all at the top of their game and then some. Johnny Messner is great as Gooding’s cohort who can’t keep his mouth shit, and watch for Mike Starr, Leonor Varela, Paul Sampson and Louis Mandylor too. Dark deeds, unexpected betrayal, self destructive ego, combustible machismo and ironic twists of fate are explored here in a script the remains as one of my favourite of that year. Really excellent stuff.