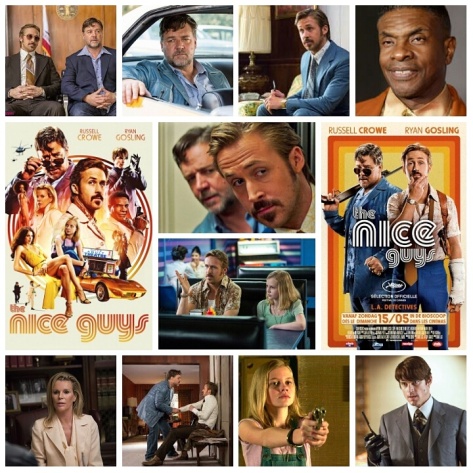 The Nice Guys is a torrential downpour of laughs, prat falls and lovable idiocracy, a formula which director Shane Black perfected with his super underrated Kiss Kiss Bang Bang. This one is no doubt it’s sister film, and while it has comedy in spades, top tier performances all round and luscious 1970’s production design, it’s just a we bit under-plotted. Having said that, that’s my one and only complaint about it. It’s the funniest film of the year by far, thanks to the rough and tumble pairing of Russell Crowe and Ryan Gosling. Crowe is Jackson Healy, a mopey hired thug who will put the hurt on anyone if the dollar is right. This occupation has him cross the path of Holland March (Gosling) an ex cop PI who, according to his daughter (Angourie Rice), is the world’s worst detective. He’s certainly a buffoon, a trait which forms one half of their comedic shtick, the other being Healy’s laid back exasperation everytime March gets them into trouble, which is pretty much throughout the entire film. The two of them unwittingly stumble into a dangerous turn events involving the justice department, murder, the apparant suicide of a porn star (Margaret Qualley), a very scary assassi  (Matt Bomer) and one angry goon played by an afro’d out Keith David. It’s tough to make heads or tails of what’s really going on, but like Kiss Kiss Bang Bang it’s not about the plot or the outcome, it’s more about watching the characters trip over each other in style as they get there. Crowe is terrific, a bear of a dude who’s in way over both his head, IQ and pay grade, aghast at Gosling’s antics at every turn. Gosling’s character belongs to that special class of stupid that is so clumsy that he circumnavigates his own ineptitude and ends up falling right into clues, without a clue how he got there. After a string of recent stoic introvert roles, he’s the most animated character of the film and is clearly having a ball. None of what the duo do would be possible without March’s precocious 13 year old daughter, played with uncanny ability by Rice, whose star is going to be solidly on the rise, I’d wager. A reunion of sorts occurs with the arrival of Kim Basinger as the head of the justice department, joining Crowe again after their work in L.A. Confidential. Basinger isn’t given much to do ultimately, but her presence is a welcome addition to the vibe. Black deserves kudos for his gorgeous recreation of L.A. in the 70’s, right down to the sickening lampshades pastel suits and souped up cars it’s a treat to see. The energy from Crowe and Gosling is where it’s at with this one, and they both eagerly tuck in to the dialogue, making this one groovy, delirious riot of a flick.