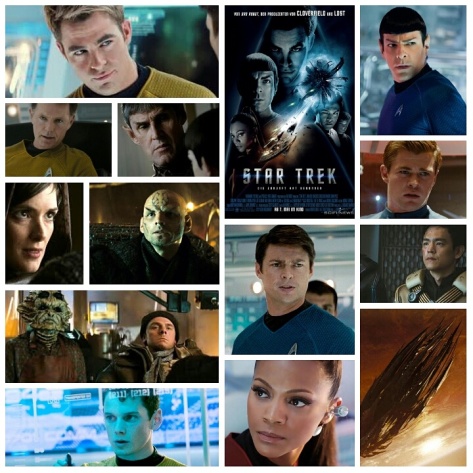 I’ve never really been a trekkie my whole life. Didn’t grow up with the television series and haven’t actively explored it later in life. When the announcement came that wonder-kid JJ Abrams would be taking on the lofty overhaul of a remake, I didn’t freak out or anything. In fact I waited quite a while before seeing it in theatres, dragged along by a buddy who talked it up quite a bit. Well, it was amazing, and still is. Nothing gets you pumped and makes your heart ache quite as much as that epic ten prologue, starring an intrepid Chris Hemsworth who selflessly saves the lives of everyone onboard his ship, including his newborn son, James T. Kirk. When your eyes flood with tears in the first few minutes of a film, it’s always a good sign. Abrams ushered in Star Trek for the new generation, and I imagine strived to keep core elements like friendship, cameraderie and wonder alive as well. Chris Pine makes one hell of a Kirk, but then he’s one of the best in his age group these days. Cocky, belligerent, dysfunctional, impulsive and recklessly brave, he’s the perfect opposing force to Zachary Quinto’s calculated, logical, no nonsense Spock, who goes through quite a wringer when his entire world is decimated by rogue Romulan extremist Nero, played by a sensational Eric Bana. Both Kirk and Spock are no stranger to loss, being affected and reacting to it in different ways. Their initial rivalry tangles into the beginning of a friendship, hinted at by Leonard Nimoy’s Spock Prime, visiting Quinto from far in the future (time travel, baby). The plot and character motivations are in fact mostly about loss and anger; Nero himself is driven by grief which has morphed into poisonous hatred, willing to inflict hurt a thousand fold in return for what happened to his people. Bana finds the wounded areas of Nero, and uses the trademark Romulun leer to cover them up in violent fury. There must always be comic relief too, and when the banter between the two heroes gets too dark, the spotlight shifts to chipper Scotty (Simon Pegg) and a brilliant Karl Urban as Leonard ‘Bones’ Mccoy, the ship’s neurotic doctor. Urban is cast heavily against type in the liveliest role he’s ever been thrown, and clearly loves every antsy second of it. John Cho makes a formidable Sulu, and the sadly departed Anton Yelchin charms the pants off of everyone with his priceless russian accent. Clifton Collins Jr. and Jennifer Morrison are great as well. Abrams loves to cast beloved actors from bygone eras in these things (I peed a little when Peter Weller showed up in the sequel), so keep a look out for terrific work from Ben Cross and Winona Ryder as Spock’s parents. Bruce Greenwood is nobility incarnate as Commander Pike, the kindly captain who sees the potential in Kirk and paternally attempts to clear the wreckage of his personality, dust it off and make something out of him. The special effects and set pieces are a dizzying dream of nonstop adrenaline. The opener I mentioned before, a show stopping fight scene atop a giant chain miles above the surface of a planet, the hair raising arrival of Nero’s ship (it looks like some horrific giant space beetle) and a chase across a snowy tundra pursued by an evil Yeti Muppet thing are highlights that demonstrate how effective and useful CGI can be when implemented properly. For all its razzle dazzle though, Star Trek is ultimately about relationships between different beings (human or other), the ways in which they deal with tragedy, love one another, learn to coexist, help those in need and most importantly, explore the wonders of the universe around them. I admire the fact that in a huge Sci Fi blockbuster such as this, those kind of themes and qualities come first. We are all made of stars, and inward exploration of the ones that reside in us and how they make us what we are is just as essential as the world’s that lie millions of light years away, awaiting our arrival. JJ understands this, and I offer him a well earned Starfleet salute for it.