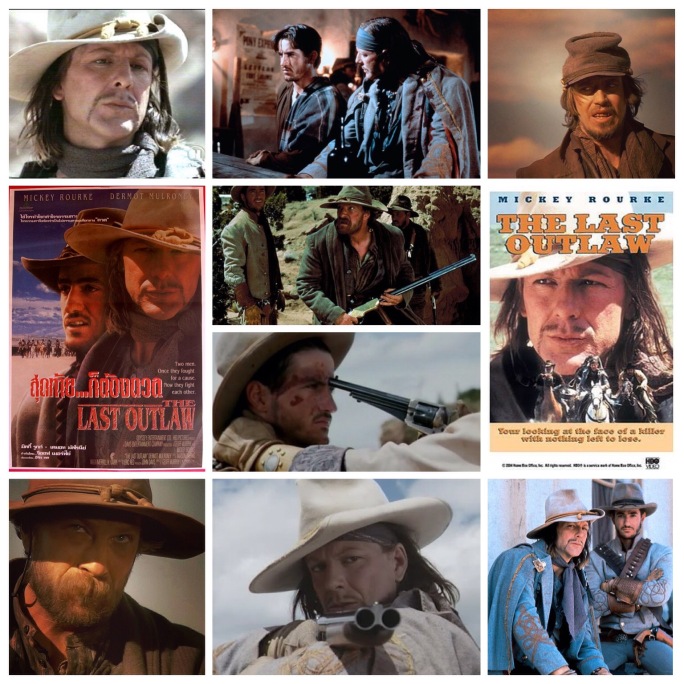 The Last Outlaw is a revenge themed western written by Eric Red, and if you’re at all familiar with his other works (he also penned The Hitcher and Near Dark), you’ll have some idea of how bloody and intense it is. It’s a smile story populated by hard bitten, gruff sons of bitches, and the violence comes fast and hard from all directions as soon as a few backs are stabbed, and several ravenous tempers ignited. Often in westerns the violence is clipped and minimal, the damage which a six gun does to flesh oddly shirked in favour of theatricality. This one has no use for that, and messily displays exactly what such a weapon does to people, repeatedly and with no discretion. It’s rough, gritty, Walter Hill style stuff, with not a trace of levity, smash or buckle, and every character kicking up dirt and anger the whole time. The film opens with a daring bank robbery, executed by former civil war Colonel Graff (Mickey Rourke), and his brutal gang. Their victory turns sour when mutiny looms among them in the form of Graff’s second in command, Eustos (Dermot Mulroney). He can’t abide by Graff’s sadistic methods, and bitterly betrays him. The rest is a bullet ridden cat and mouse game in the dusty deserts and shanty towns of the southwest, as the bodies pile up and the blood spatters in the dirt time and time again. Rourke is an implosive, grade A dickhead as Graff, a man less concerned with the fruits of his labor and more driven by the desire to exact violent retribution. One wonders if that’s what he’s in the game for anyway, to bide his time until something goes amiss, and the revel in the carnage. The supporting cast is just epic, with work from Steve Buscemi, Ted Levine, Paul Ben Victor, Richard Fancy, John C. McGinley and Keith David. It’s essentially one big stylish bloodbath, a pulpy ride through the gutter of arrogant machismo. Terrific fun, if that’s your thing.