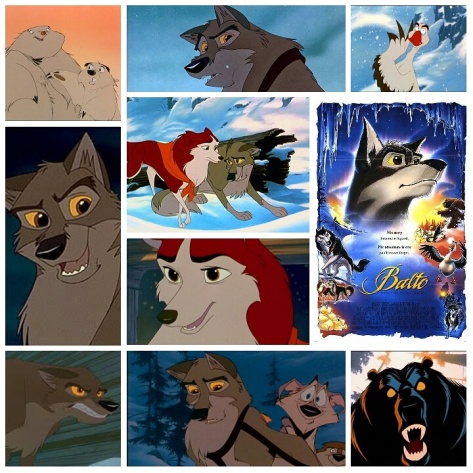 Anyone remember Balto? I remember Balto. Pepperidge Farm remembers Balto too. How can you not, when it was one of the most charming, beautifully done non Disney animation films we saw as kids. I think the fact that it was not made by Disney threw it into obscurity a bit, but there’s the odd copy floating around out there in the Arctic snow. It’s an underdog story (built in pun there eh) about half husky, half wolf Balto (Kevin Bacon having a blast) who hangs around Nome, Alaska and is ridiculed by the local sled dogs for being a mudblood. Every dog has his day though, and Balto gets his when a deadly epidemic breaks out in town during a storm, and he courageously volunteers to make the perilous journey to a far away outpost that has the required medicine. Joining him are his lovable goofy goose friend Boris (Bob Hoskins trading in his jovial cockney accent for a jovial russian accent), ant two adorable polar bears called Muk and Luk. Watching out for him is the only purebred dog in town who cares about him, Jenna the husky (Bridget Fonda), determind to muster a rescue party when he gets in over his head. Balto must brave raging blizzards, treacherous fellow sled dogs and the world’s biggest grizzly bear (seriously that thing is like 15 feet tall) to save the town’s population, and he does it all with bravery, charisma and a winning attitude that’s essential in any animated film. His sidekicks are endearing, his efforts intrepid and the film a winner.