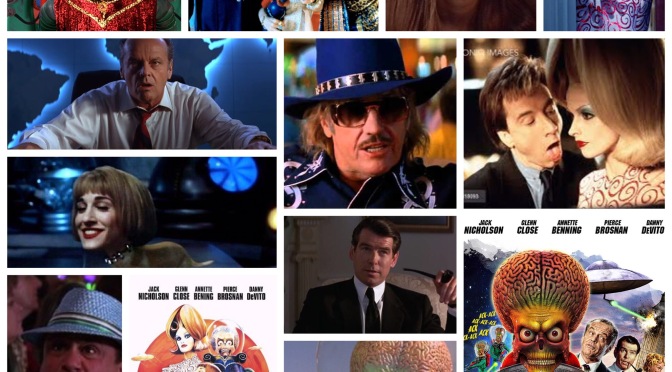 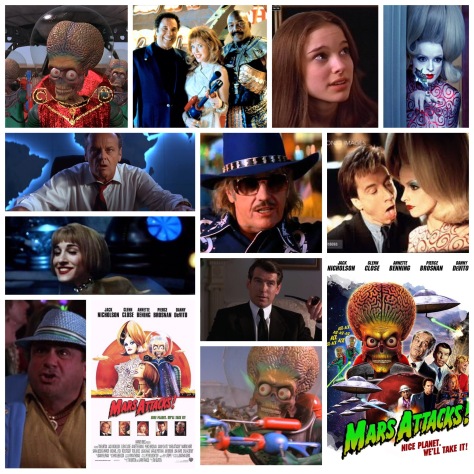 Tim Burton’s Mars Attacks is a spectacular howling good time, a 50’s inspired gumball machine packed with schlock, satire and more star studded send ups than you can shake a stick at. It’s so silly and overstuffed that one just has to give in to it’s fisher price brand of mayhem and just watch the wanton hilarity unfold. Martians are indeed attacking, and they’re evil little rapscallions with giant brains, buggy eyes and lethal ray guns. Humanity’s best are left to fight them, and let’s just say that’s not saying much with this bunch of morons. Jack Nicholson does a double shift as both the hysterically poised, rhetoric spewing US President and a sleazeball casino tycoon. Annette Bening is his hippy dippy wife, while Rod Steiger huffs and puffs as a war mongering potato head of a general. Over in Vegas, prizefighter Jim Brown and his estranged wife (Pam Grier) fight against hordes with little help from obnoxious gambler Danny Devito. Pierce Brosnan is a bumbling tv expert who sucks on a pipe that he apparently forgot to fill or light, a subtle yet precious running joke. The only people with sense are trailer dwelling youngster Lukas Haas and Natalie Portman as the President’s daughter, and the method they finally find to destroy these nasties has to be seen to be believed. The cast seems padded simply so we can watch famous people getting dispatched by slimy aliens, and also contains Tom Jones as himself, Lisa Marie, Jack Black, Paul Winfield, Michael J. Fox, Christina Applegate, Glenn Close, Joe Don Baker, Barber Schroeder, Sylvia Sydney, Martin Short and Sarah Jessica Parker’s head on the body of a chihuahua (don’t ask). There’s little story other than Martians attack and kill shitloads of obnoxious people, but therein lies the big joke, and it’s hilarious. Aaack !