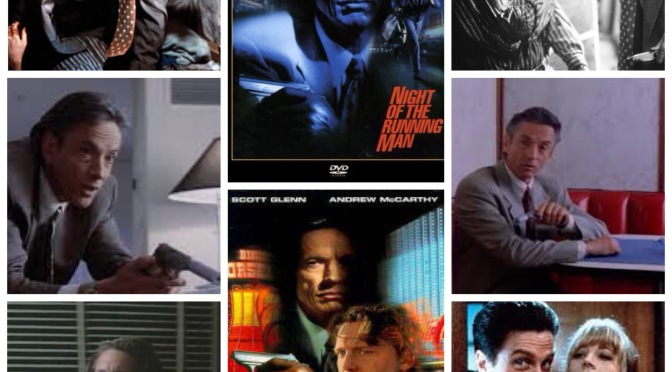 Mark L. Lester’s Night Of The Running Man, not to be confused with the Schwarzenegger classic of a similar moniker, is a mean spirited little urban thriller with Scott Glenn in one of his primo amped up psychopath roles. In the spirit of Scorsese’s After Hours, a hapless cab driver (Andrew Mcarthy) finds himself being hunted through the Las Vegas nightscape after one of his fates is murdered right in front of him, but not before leaving behind a suitcase full of millions. The hot man called in to pursue the funds is David Eckert (Glenn), a sociopathic monster with a heavy artillery, bent on retrieving the case and killing as many people along the way. One is reminded of the cult flick Judgment Night as the poor cabbie is forced to run all willy billy through the urban hustle, constantly evading Glenn’s lunatic presence. Further villainy is provided, albeit of the more hammy variety, by a scene stealing John Glover as an associate of Eckert’s who also casts his net to catch McCarthy, his scenes are so arch and bizarre that they almost swerve the thing into slapstick comedy territory. You can do way worse in budget B movie land, and this one clearly seeks to entertain with it’s broad characteristics and blatantly trashy tone. Plus, Glenn is, quite literally, killer good.