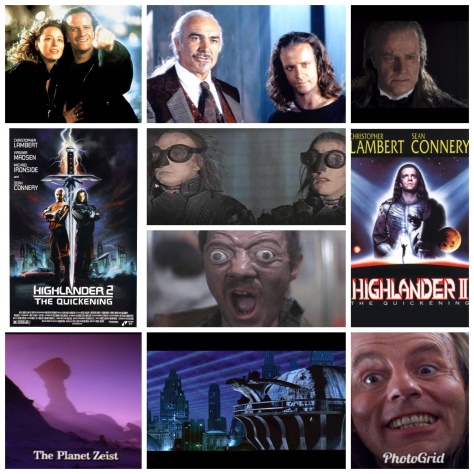 I have no words for Highlander 2 other than ‘what in the actual fucking fuck.’ I can’t call it Russell Mulcahy’s Highlander 2 because the poor guy tried to have his name removed from the credits, and who could blame him, really. In fact, it’s so thoroughly godawful it shouldn’t even be called Highlander, either. It’s ‘Movie X’, fit only for quarantine and to be blasted off into space so the folks on fictional planet Zeist can keep it. I love the first Highlander, it’s a camp cult rock n’ roll sci-fi sleeper classic, and any sequel would have large shoes to fill. What can be found here? Time travel. Outer space. An artificial ozone layer. Autistic porcupine alien assassins. Michael Ironside ripping off Clancy Brown’s beloved Kurgan villain so blatantly it hurts. Christopher Lambert in old age makeup that looks like it inspired Jackass’s Bad Grandpa. A Sean Connery montage visiting a tailor set to the William Tell Overture. I know all these ingredients could potentially brew up an even zanier cult classic than the original, but nope, no sir. This movie is a badly told story with scant context and zero continuity in both connective tissue to the first film and finding any organic roots of it’s own. Lambert’s Connor McLeod appears to be both old, young and somehow from a different planet, oh and he helped build a synthetic ozone layer to protect earth, a subplot both arbitrarily drawn up and coincidentally concocted around the same time as Total Recall came out, which I’m sure is just one big coincidence, ho ho. Ironside plays some radical called Katana who travels to earth and through time (wat) to kill Connor because there can be only one, a mantra that the film also happily dismantles in its earnest quest to bury the legacy of the first film in confusion and custerfuckery. I won’t even begin to describe Virginia Madsen’s haphazard love interest, a ‘scientist’ who winds up in bed with McLeod like minutes after she’s met him and seen him reverse age randomly and get young again. I’ve heard that Lambert would only do the film if Connery did too, and that the pair formed a bond working on the first film. The studio would have been better off just pitching their bucks in for the two of them to take a fishing trip together, no cameras involved, and save us all the headache.