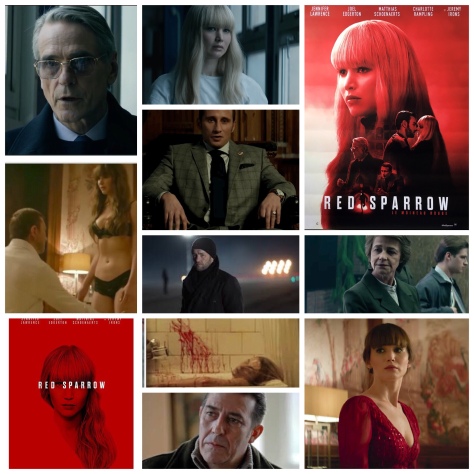 I really didn’t want Red Sparrow to be the dud everyone says it is, but.. yeah it is. I mean, I’ve got love right off the bat for a hard R rated spy flick released by major studios, and this one earns it’s R rating so much so that it’s nasty business to sit through. I just wish it had the aptitude to be more than a cold, unremitting series of events that go far beyond unfortunate. More than anything I’m just proud of Jennifer Lawrence for taking on such a dangerous, vulnerable role, she’s a natural born star and any project she’s attached to is lucky to have her. She just had the shitty luck of her immense talent being drowned in a sea of sadism and ultimate boringness here, which is a shame. Playing a Russian ballet dancer who’s career is cut short by an injury, her shady pervert uncle (Matthias Schoenaerts) recruits her for Sparrow School, a twisted spy academy that focuses on sex as a weapon, where she undergoes rigid, perverse training under the stern watch of Matron (Charlotte Rampling, terrifying). This is all run by the government in secret, and soon she becomes involved in a confusing cloak and dagger operation involving American agent Nate (Joel Edgerton), which frequently sees her in degrading, sexually violent situations that seem a bit excessive after a while. I’ll always champion R rated films and there’s some wicked bloody action here involving her training, but the lurid psychosexual stuff is kind of sickening and seems tacked on like a pornographic sheen. The cast is alarmingly first rate, with work from Joely Richardson, Ciaran Hinds, a bored looking Jeremy Irons and a drunken cameo from Mary Louise Parker. No one seems to really fit into the story though and the film struggles to hold our attention beyond just being in shock and actually giving a shit about the story, which is grey and lifeless. It also can’t decide on it’s setting either; everything about the film screams 70’s/80’s Cold War era, until Rampling’s character refers to the West as fixated on shopping and “social media”, which sounds suspiciously like a line that was added in reshoots to try and update a preexisting setting, the worst kind of continuity error because it’s deliberate. There’s literally not a single cell phone visible at any time!! Cmon guys, get your shit straight. It’s sad because there’s a lot of sumptuous atmosphere here that goes to waste, as does a magisterial score by James Newton Howard. The biggest crime here though is how great Jennifer Lawrence is in the role, and how royally the film just lets her down. She’s resilient, tough and smart running down a gauntlet of predators, assassins and danger, but none of that is as good as it sounds, and she deserves better.