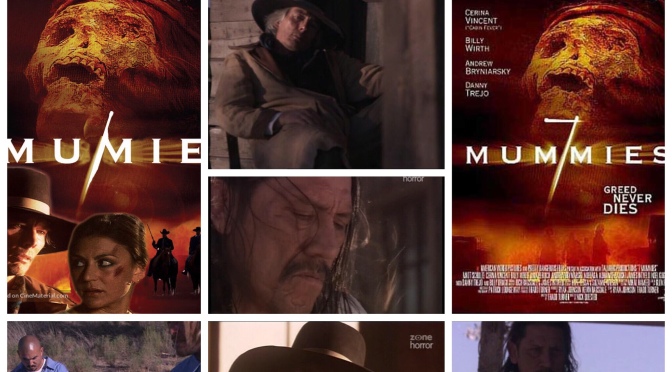 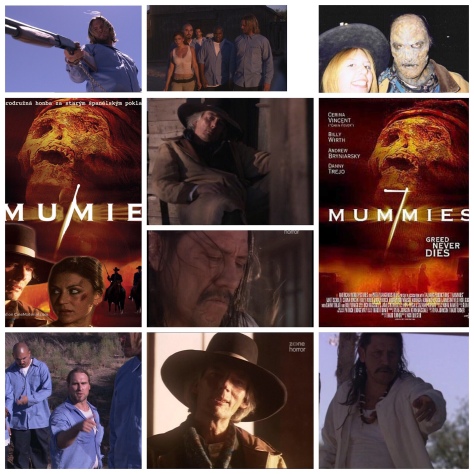 Seven Mummies is so bad it plays like something that From Dusk Till Dawn shat out along the highway. There’s not even one mummy in the thing, let alone seven, instead it’s a dull, shoddily acted piece of bargain bin garbage and the plastic used to make DVD copies would have been put to better use elsewhere. It concerns a bus full of convicts who escape somewhere in the remote southwest, and head for the Mexican border. On the way they stumble across Aztec treasure that has some vague curse, and soon an even vaguer evil is after them all, but none of it makes much sense. Danny Trejo is in it as a mysterious old weirdo called Apache (never mind that he’s so obviously, visibly Mexican), who sits on a dilapidated desert porch and ominously laughs to himself while staring out at the horizon for at least a whole scene. Seriously. No actual lines at all, just laughing and staring, it’s so odd. The one saving grace is veteran villain actor Billy Drago as the evil ghost of an old west outlaw who shows up to cackle and terrorize everyone in a classically hammy bit of theatricality, it’s always great to see him. Other than that there’s really no signs of life to this one, from crappy low rent CGI monsters to lazy filmmaking all round. You’re better off pulling up a chair next to Trejo on that dusty porch and joining him as he chuckles at the tumbleweed dumpster fire of a film he agreed to d just for a few bucks. Amazingly though, it’s still better than that Tom Cruise Mummy flick from last year. Ugh.