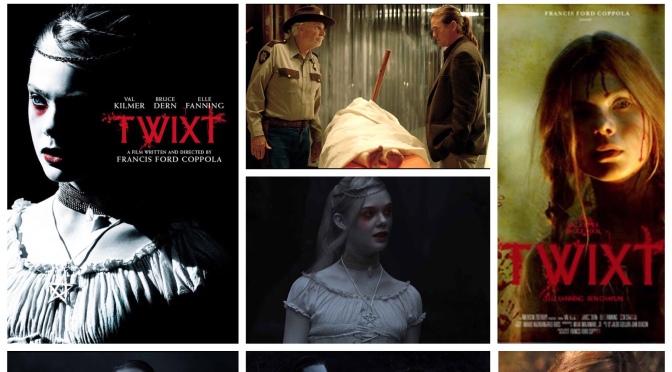 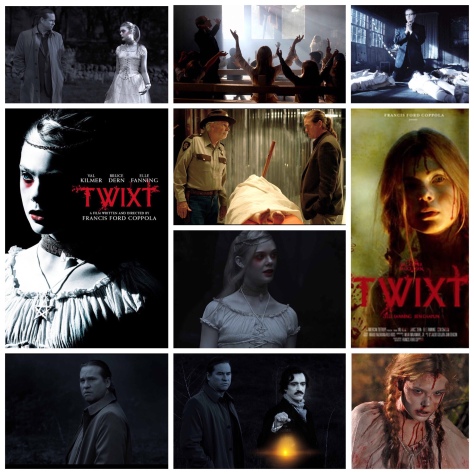 How to even approach Francis Ford Coppola’s Twixt. For a guy whose career has spanned decades from golden age Hollywood to contemporary and etched out a few mile markers that have practically defined the medium, this is definitely both the odd duck and black sheep of the man’s career. There’s no way around it either so I’ll be blunt: it’s kind of a mess. But it’s an intermittently breathtaking mess, like someone spilt a can of turgid motor oil in their garage, but a few gold and silver flakes of airbrush paint snuck into the oozing puddle. There’s a noticeable Stephen King vibe here, with flippant Val Kilmer as horror novelist Hall Baltimore, struck with writer’s block and hiding out in a creepy Midwest town to try and get the creative juices flowing. There’s murder afoot there, in more ways than one, and soon he’s visited by the ghost of a girl (Elle Fanning, darkly ethereal) who guides him along a chain of memories that recall missing children from the past. The town’s gruff, obnoxious Sheriff (Bruce Dern) doesn’t appreciate Hall nosing around his neck of the woods and harasses him at every turn. There’s Skype seasons with his wife (Joanne Whalley, Killer’s real life ex) that feel suspiciously improvised, an appearance by Edgar Allen Poe himself (Ben Chaplin) and creaky narration from none other than Tom Waits. Ultimately it doesn’t really connect, and feels so fascinated by itself that it fails to coherently tell us the tale in a way that sticks. What does take hold, however, are some truly gorgeous and striking visuals, lit by stark silver moonlight, accented by crimson blood and brought to unholy life by tactile, riveting slow motion, like a dream sequence in which Kilmer observes a group of ghost children frolicking on an eerie riverbank. Much of it feels subconscious and free form or lifted out of an Evanescence music video, but it’s beautiful nonetheless. It just needs the focus of the script to properly come across as a whole story, which, sadly, it mostly doesn’t have. Fanning makes the biggest impression as the ghostly waif, peering off the film’s poster and promising a poetic spook show, which… we kind of get. This has been seen as a shrill blast of emptiness by many critics, but there’s some fun to be had, and plenty of gothic eye candy to feast on, even if the brain goes hungry.