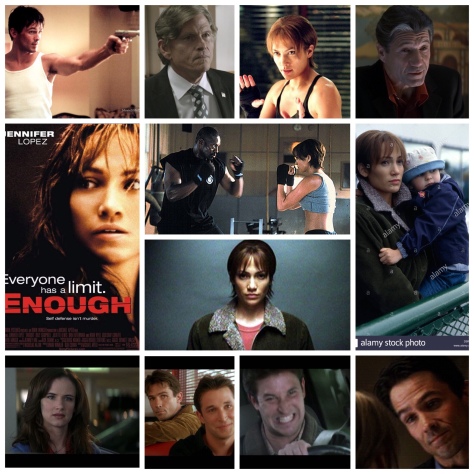 I’ve always liked Michael Apted’s Enough, a slick, scary girl-power flick that’s given heart and personality by Jennifer Lopez, who brightens and classes up anything she headlines. It’s also got a subtly eclectic supporting cast of ice cool character actors/actresses and uses them to great potential too. Despite being predictable (a story like this usually will be in Big Hollywood), the motions it goes through somehow just feel fresh and engaging in ways that not all films like this might be able to whip up. J-Lo plays Slim here, a battered housewife who has the misfortune of being married to Billy Campbell’s Mitch, a terrifying sociopath who beats her senseless. Worse still, he’s a rich and powerful dude with a lot of high profile connections, which makes escaping his tyrannical dominance a tad tricky. She’s got a young daughter (Tessa Allen) who’s caught in the crossfire, and for Slim, enough has become enough. On the run, changing her name and decking herself out with some gnarly hand to hand combat skills are all part of a journey to both freedom and empowerment, an arc that Jennifer makes us believe with her soulful conviction and bruised spirit. Juliette Lewis is a low key scene stealer as her good friend who aids in the escape. Fred Ward does a quietly anarchic turn as her somewhat neglectful father Jupiter, who is clearly not the most compassionate fellow but does his best to right the wrongs of yesteryear with his considerable wealth and resources too. Noah Wyle does a charming scumbag shtick as a dirty cop in Campbell’s pocket who hunts her like a wolf, Jeff Kober is cheerfully menacing as one of his gung ho faux FBI Agent lieutenants, and watch for work from Dan Futterman, Brent Sexton, Michael P. Byrne, Bruce A. Young and Bill Cobbs too. The training J-Lo uses is Krav Maga, a viscerally intense martial art that’s taught to Israeli special forces, and it’s a rush to see her beat the absolute fucking shit out of her shitty asshole husband with it in some close quarters, emotionally charged bone breaking and appliance slamming beatdowns. Her and Campbell have some warped, freaky chemistry too, he’s like some demon who’s been imprisoning her and her the dark angel who strikes back fiercely. Great flick.