Before Terrence Malick lyrically explored the relationship between settlers, natives and nature in The New World, Michael Mann crafted the emotionally gripping, beautifully feral The Last Of The Mohicans. Take Mann out of his comfort groove of big city crime epics and whatever new avenue he explores is going to be incredibly fascinating (his much forgotten, sadly panned The Keep is further evidence). Trading in looming urban skyscrapers for equally imposing trees of the frontier, high powered weaponry for one badass long-shot rifle and the onslaught of rapid fire combat for incendiary cannon fire, the colonial times suit him splendidly and he rocks this period piece for all its worth. Daniel Day Lewis is a force of nature as Nathaniel Hawkeye, the white man raised by his adoptive father (Russell Means) and brother (Eric Schweig) in the wild. Madeleine Stowe is a dark haired candle of radiance and fiercely spirited as the lovely Cora Munro, brought from the prim, lacy traditions of Olde England out to the wild, uncompromising new land, with her impressionable young sister (Jodi May is low key brilliant). Wes Studi gives the bitter hearted warrior Magua a steady grace and brutal resolve. The film is lovingly made, sweeping from thundering battles to cascading waterfalls to meticulously constructed war forts to uneasy treaties to verbose politics to romance that stirs the heart and unlocks the tear ducts. But it’s all about those last twenty minutes, man. Holyyy fuck does this movie have an ending. When the final, white knuckle climax happens atop the scenic yet unforgiving Promentory Ridge, hearts, bones and dreams are broken as all the characters collide in a tragic, inevitable confrontation that leaves fire in your heart and tears in your eyes. James Newton Howard and Trevor Jones provide a legendary, soul stirring musical score that swells for the final act and carries it to transcendent heights. Mann directs with a compassionate, objective eye, never designating anyone as the good or bad guy, but simply showing us human beings fighting for survival, love and revenge in a land only just finding its cultural identity. A real classic and one of the best of the 90’s. Oh, and avoid the director’s cut at all costs. That’s not usually advice I’d give for any film but Mann somehow thought it necessary cut an incredibly important final scene of dialogue between Lewis, Means and Stowe that gives thematic weight to the story and caps off the characters arcs gorgeously. Rookie move, Michael, that’s a key scene and bookends the film beautifully. 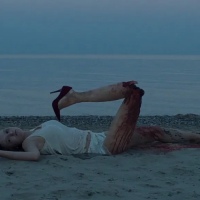