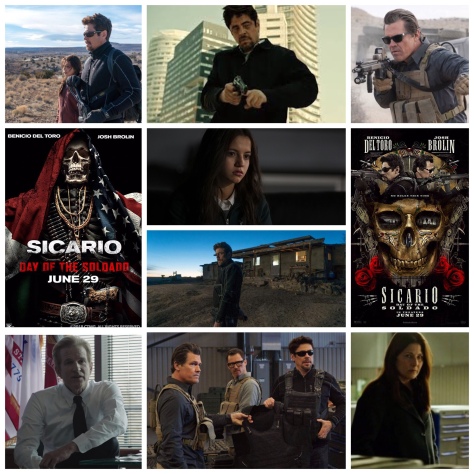 I have to be brutally honest about this, but Sicario 2: Day Of The Soldado is nowhere close to a worthy sequel, let alone a good film. After mulling it over a bit since I saw it a few weeks ago, it just feels hollow, superficial and weak in all the places the first one was provocative, mythic and haunting. My main gripe is that it has nothing really to say; the first was deep, dark and dense, with a thoughtful screenplay by Taylor Sheridan brought to life by Denis Villeneuve’s concise, nerve wracking direction, it challenged today’s political climate and casted dark shadows on the anthropological coordinates of present day North and Central America. This one feels like a lurid death trap of violence without weight, thin characterization and a weirdly conceived narrative that misses all the beats and ends up nowhere. Benicio Del Toro and Josh Brolin return as antihero assassin Alejandro and cavalier special ops spook Matt, this time trying to start a big ol’ cartel war by kidnapping the daughter (Isabela Moner) of one boss to frame the another, thereby letting the animals wipe each other out and stop the new trend of these cartels smuggling in Muslim terrorists onto American soil so they can blow up innocent families in shopping malls, which we see here in unnecessarily sickening, gratuitous fashion. This is all sanctioned in clandestine by the stony US secretary of defence (Matthew Modine) and overseen by Brolin’s icy handler (Catherine Keener has fun with the dialogue), and naturally it all goes tits up before too long. When Alejandro and the cartel’s kid find themselves on their own following an ambush, there’s an opportunity for developing his character farther and seeing some kind of redemption, which at first seems like it may happen until Sheridan shuts it down hard and veers the story off into some other stuff that drags and just puts Del Toro’s arc in the doldrums. Brolin finally has a crisis of conscience, but it’s too little too late when we get there. Also, the whole terrorist angle just does not work, and feels totally shoehorned in. The first film, although ultimately fictional, felt like it could indeed be playing out for real somewhere out there, everything was drawn from things we’ve known to be authentic. But cartels moving jihadists across the border for attacks on American cities? Come on now, I could practically feel the influence over Sheridan’s shoulder to work that in somehow. I did enjoy the cinematography by Dariusz Wolski and score by Hildur Guonodóttir, taking over from the late Johann Johansson, but since she’s worked with him on projects in the past, the feeling in the music remains just as austere and menacing. This is just all over the place though, completely lacking the darkly pristine focus and portentous drive of the first. At the end it feels like a big blast of nothing, and if anything it just made me appreciate the first one more.