There’s a select few theatre going experiences that are mile markers for me in the sense that they changed and expanded my realm of experience in the cinema. I remember seeing Alfonso Cuaron’s Gravity in 3D, AVX, iMax fuckin all the bells and whistles were present and accounted for. I walked into the theatre almost on a whim while my ex was at dance rehearsal and I had a few hours to kill downtown, the film had already been in theatres for about a month, I was aware of the buzz but the trailers weren’t doing it for me and it wasn’t high on my priority list. Well.. I’m glad I made that impulsive decision because not only is it now one of my favourite films, but the theatre experience, particularly alone and totally attentive to the immersive universe it created, is something I’ll treasure forever. Sandra Bullock gives a career best as mission specialist Ryan Stone, stranded in the heavens when chunks of a decimated satellite shred through the space station she’s fixing up, leaving her and veteran astronaut Matt Kowalski (George Clooney in a roguish portrait of cavalier stoicism) adrift among the stars. It’s an arresting nail biter of a sequence that leads to many more, all staged in breathless, unbelievably realistic fashion by Cuaron and cinematographer Emmanuel Lubezki. Bullock’s character is in a purgatorial womblike state up here, wounded by tragedy from years before and unable to fully continue on with her life without some kind of rebirth, which the unpredictable vacuum of space is more than willing to contribute to at every turn. Hair raising near misses and death defying escapes abound, with moments of tranquil, hypnotic pause to catch glimpses of the dazzling blue green globe below or communicate across millions of miles and a language barrier with an Inuit man over a rogue radio signal. This is all a lead up to what has to be one of the most stirring, adrenaline soaked descents to the planet’s surface ever filmed. Cuaron knows how to raise pulses and get you to invest in character so that when the time comes for Steven Price’s gorgeous cosmic battle cry of an original score to herald her journey home, attentions are riveted. It’s likely my favourite sequence ever shot in a film set in space, a triumphant display of resilience and poetic grandeur as she plunged through the embryonic atmosphere of our planet in a rickety little escape pod and hurtles towards the surface, angelic strains of music echoing all around her, surrounded by flaming meteors of detritus from the space station like fallen stars. I wish they’d bring this film back to theatres every couple years so we can relive the glory at its fullest potential. A masterpiece and miracle of an achievement from all involved. 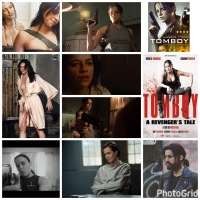