Darren Aronofsky’s Noah is an odd one, a film that I enjoyed for the fact that it somewhat cuts ties to the biblical tale it bases itself on and does it’s own thing. The style and tone are so out of place and out of time that one could almost imagine this being set sometime far, far in the future instead of the distant past. Aronofsky introduced a very earthy, tactile and nature based aesthetic with his film The Fountain (which is my favourite film ever made), and he explores it further here, with time-lapse photography of plants growing, barren landscapes that suggest either a very young planet earth or a very old one and simple, elemental costumes that could be of both ancient ilk or post apocalyptic fashion. The story is quite literally as old as time, and given new life by a fantastic cast of actors starting with Russell Crowe as Noah, a man jaded by humanity and conflicted by forces beyond his own understanding. Jennifer Connelly, Douglas Booth, Logan Lerman and others play his family, one of whom knocks up Emma Watson, causing quite the controversy when the almighty creator commands Noah to build that ark before the monsoons come. Anthony Hopkins is the prophet Methuselah, and Ray Winstone’s Tubal Cain a rough hewn archetype of all of our worst qualities as a race. Coolest of all might are Frank Langhella, Mark Margolis, Frank Oz and Nick Nolte as some ancient looking stone golems who are actually angels sent down by the creator to shepherd humans when needed. It’s funny because Nolte is so grizzled and rugged in his old age these days he probably could have just played the role in person instead of voiceover, but as it stands the special effects used to bring them to life are spectacular, a standard that holds throughout the film from landscapes, props, wildlife and general visual mood. Now, I can never get behind Christian films or take them seriously, so it’s a good thing that Aronofsky remains at arm’s length from the religious stuff and takes a more mythological approach to the story in the sense that this could be happening in any world or universe, and isn’t tied down to one theology. Not a perfect film, but the arresting visuals, fantastic cast and overarching message of love and reverence for life in all forms make it something special. 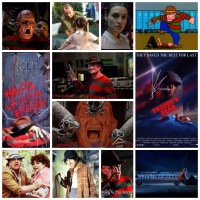