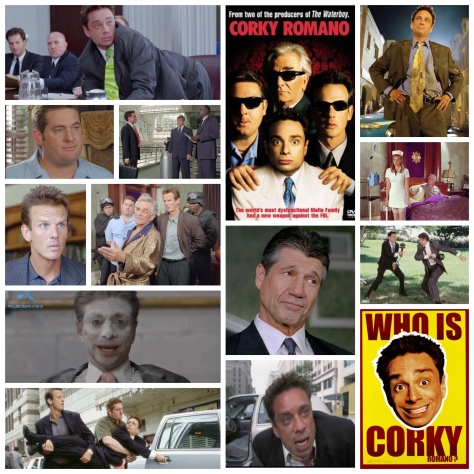 Call me crazy but after finally daring to watch it, I can’t say I’m one of the many people who think that Corky Romano is one of the worst films ever made. Don’t get me wrong, it’s a solid fucking toilet destroying turd of a film, thoroughly shitty no doubt, and yet… I laughed. A lot. I’m still trying to figure out if the laughs were ironic, genuine or spurred on by the eight plus beers in my system, but irregardless, I can’t say it wasn’t a good time. Chris Kattan is one of those actors like Rob Schneider, Seth Green or David Spade who are in what I call the ‘mosquito category.’ They can’t act, they’re not really that funny and they seem to exist for no reason other than to buzz around like vermin. As twitchy, dysfunctional mafia brat Corky Romano, Kattan is admittedly his annoying self but he nails a few laughs nicely, and lands one big one spectacularly involving cocaine and schoolchildren. His mobster dad (Peter Falk and his loopy eyes) is about to be testified against by a mysterious informant, so his two volatile brothers (Chris Penn and Peter Berg) and uncle (Fred Ward, slumming it and loving it) hatch a cockamamie plan to send him in to the Bureau as a fake Fed and destroy evidence. If you’re wondering why, or how this is a good plan, don’t bother. The film’s haphazard script is like several post-it notes drunkenly stuck on a fridge, and instead of coherency in plot we get an insane parade of slapstick shenanigans and situational comedy masquerading as a story. Saddled with a stern FBI boss (Shaft himself, Richard Roundtree), a foxy partner (Vinessa Shaw) and jealous bureau cohorts, it’s a laundry list of fuckups, arbitrary car chases, third grade level humour and unapologetic what-have-ya. This came out in 2001 and it’s funny to see how much times have changed and people’s tolerance for certain types of humour have dried up, they use words and scenarios here that would have the film swiftly boycotted these days, but it’s refreshing to watch older films where they didn’t have to tiptoe on eggshells quite as much. What else is there to say, really? This is a wantonly childish display of bottom feeding comedy, and the immature man-child in me found it to be a fucking laugh riot. Uneven, sure. All over the place, definitely. But funny as all hell in fits and starts.