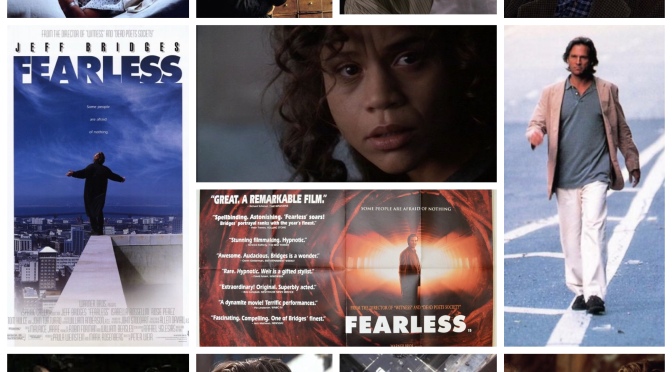 A plane falls out of the sky and crashes in a cornfield. Some of the passengers survive. Others do not. No one involved is ever the same after. Such is the premise of Peter Weir’s Fearless, a complicated, challenging, unconventional and altogether brilliant piece that goes a lot deeper than most Hollywood produced films are allowed to. Jeff Bridges is Max Klein, a man who emerges serenely from the wreck having saved multiple lives and undergone a personal change that can’t be made clear in a scene or two, but rather takes the film it’s whole runtime to explore. While the entire plane is in full panic, Max reaches a sort of tranquility in the face of death, and instead of freaking out he very lucidly gets up and joins a young boy who’s alone on the flight and comforts him. When they land and he survives, his relationship to those around him is affected including his wife (Isabella Rossellini), young son, a trauma counsellor (John Turturro hired by the airline) and others. Most fascinating is the time spent with Carla (Rosie Perez) a fellow crash survivor whose newborn baby wasn’t so lucky, leaving her in a pit of grief. They share something together that no one, audience included, can fully understand because they weren’t there. The beauty of it is that Bridges and Perez can’t really know either, but the magic of both their performances is that they make you believe they’re in this extraordinary situation for real. Bridges never plays it with a messianic or mystical aura like some would, he’s always straight up and kindly which works wonders for this character. Perez is a revelation, soulful and heartbroken but never cloying or panhandling for our tears, she earns them fair and square. I’m not one too get too heated about Oscar snubs but it’s a crime she got beat out by Marisa Tomei that year for fluff like My Cousin Vinny. Peter Weir is a thoughtful director whose films are always high concept stories, but are also always character driven to provide that balance. He’s interested not in spectacle or sensationalism here but the difficult questions that others might gloss over or be too afraid to think about. There’s two scenes revolving around the crash, one of the aftermath and an extended one of the incident itself playing out that reach a level that sticks with you long after the credits roll. Not an easy film to classify or describe in a review, but the rare Hollywood picture that tackles concepts well above what we’re used to seeing. Great film.

One thought on “Peter Weir’s Fearless”