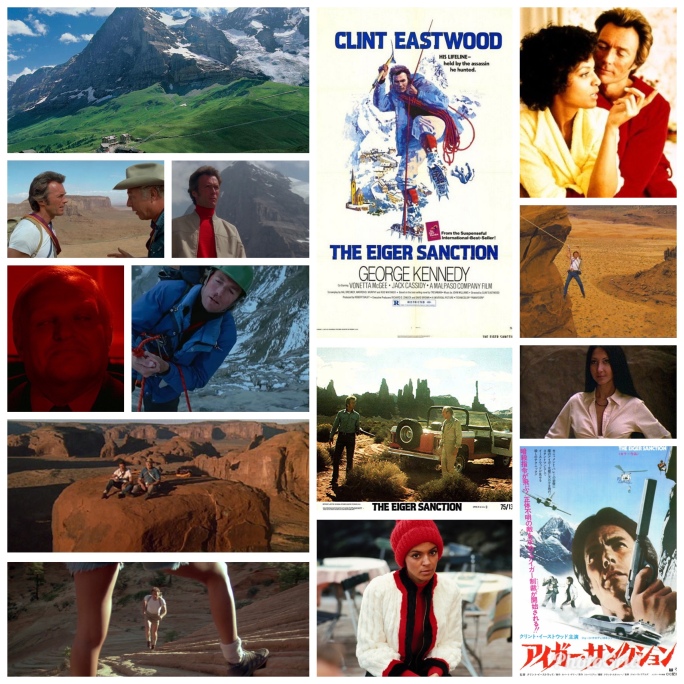 Clint Eastwood tries to do both Indiana Jones and 007 in The Eiger Sanction, a gorgeous production with incredible photography and stunt work that unfortunately is about half an hour two long, and would have greatly benefited from being a sleek ninety minute thing instead of being drawn out over a full two hours to the point where we wonder if some of the extended scenes of dialogue will end and if we’ll ever get to actually see the Eiger. Eastwood is Hemlock, a soft spoken liberal arts professor who just happens to also be a retired assassin super spy in hiding. His old organization, spearheaded by a creepy albino pseudo-bond villain (Thayer David), tracks him down and blackmails him into getting back to work, in particular climbing the infamous mountain in Switzerland to kill a target that ran up there… or something. This involves a long interlude in Monument Valley where an old buddy (George Kennedy, a study in gregarious exuberance) trains him up and an old enemy (Jack Cassidy, a study in the kind of characterization that would get a film boycotted these days lol) stirs up trouble. Then it’s off to Switzerland for an extended climbing sequence and an eventual showdown high atop snowy peaks. If this all sounds terrifically exciting… it isn’t. Eastwood shows a sure hand in directing elsewhere in his career but here the fight scenes are clumsy, cartoonish affairs, the dialogue is oddly conceived (Cassidy’s character has a dog whose name I won’t repeat here because I’m sure some lame brain would report my post) and the editing is loose and unrestrained, creating pacing that has you looking around the room for more interesting things to focus on. Still, the stunts (all done by Eastwood for real) are breathtaking, especially an ascent of one of those huge rock pillars that stand so formidably in the desert. The cinematography once the action switches to Switzerland is unbelievable but the place is so beautiful anyone could point a camera around and get gold. The climbing is all incredibly staged stuff and often suspenseful, but in terms of plot, character and cohesion it just falls apart though, sadly. I’ll always love it because my dad did, he was in the same Swiss town during filming and always talked about meeting the cast and crew. But yeah, from an objective critical standpoint, not the best Eastwood flick out there.