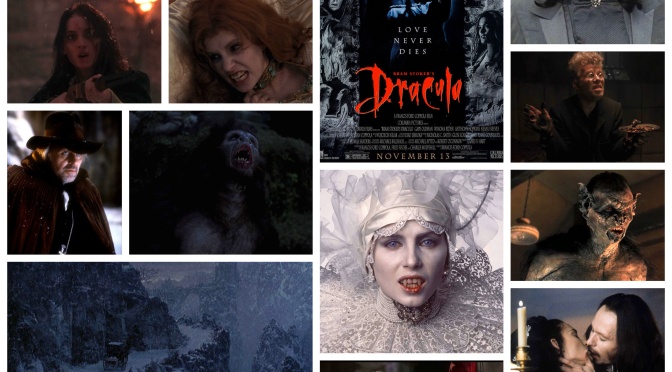 What’s your favourite movie version of Dracula? For me its always been Francis Ford Coppola’s lavish, eccentric, audacious and full bodied telling of Bram Stoker’s book, brought to life fiercely and passionately by Gary Oldman in what has to be one of his best works. This may be an unpopular choice among the older generation of folks who love this story/character but the old black and whites just don’t do it for me like this one does. Lugosi and Lee had their day but in my eyes Oldman freshness and innovation in his headlong portrait of supernatural evil ravaged by centuries old heartbreak, a romantic angle that wasn’t in the book or most previous adaptations of it but adds a dimension the story never knew it needed.

Coppola makes production design the star of this beauty, beginning with a fearsome prologue showing Oldman’s Transylvanian knight and how the man became a dark prince of vampires, before shifting the action to Victorian London. Dracula is searching for the spirit of his long dead wife who just happens to have been reincarnated as Mina Harker (Winona Ryder). People start turning up dead all over town though and Mina’s friend Lucy (Sadie Frost in an uncelebrated encore performance) has restless dreams, waking night terrors and finally goes full on vamp. This prompts the arrival of Anthony Hopkins’ hilariously blustery, borderline senile Abraham Van Helsing and the beginning of a bloody fight to save Mina, her husband Jonathan (Yes Keanu Reeves tried on a British accent but we’re not discussing that here) and most of London.

Stoker’s book is mostly made up of journal entries, letters and other written correspondence and as such the film has an episodic pace to it, but what really makes it flow are costume design, music and the wonderful performances from the varied, eclectic cast. Oldman is sensational and can almost be said to play multiple characters because of how different each manifestation of Dracula is. He finds sadistic evil in the character and accents it with love that still simmers on the back burner, spinning the character into something, dare we say, sympathetic. Ryder is terrific, her doe eyed naïveté suiting the gradually emerging horror nicely. Other excellent work comes from Richard E. Grant, Cary Elwes, Monica Bellucci, Billy Campbell and Tom Waits in a deranged showstopper of a turn as the lunatic Renfield. Costume designer Eiko Ishioka outdoes herself here with the kind of work that begs for Blu Ray action, showing Dracula in several getups from creepy old Count to full on From Dusk Till Dawn style monster, Oldman embodying each one with grace and style. Composer Wojciech Kilar turns in a portentous rumble of a score that fires up the baroque horror elements but also finds the aching romantic notes in the eye of the orchestral hurricane.

My favourite scene of the film isn’t even in the realm of horror; Dracula and Mina share a moment together with one of his wolves who he has momentarily tamed. She strokes the beasts fur in awe while he looks at her in mournful adoration and quietly says “He likes you.” Oldman finds wonderful opposites to the character in this moment and becomes something so much more than the campy monster that Hollywood has envisioned this character as before. There’s a gentle tenderness to this scene and it’s contradictory elements like that that make it stand out and accent the horror with immediacy. Masterpiece.