I’m not usually too lenient on remakes of my favourite films and 1977’s Suspiria would have been a deal breaker, but holy goddamn if they didn’t do it justice and then some with 2018’s fierce, austere, unrelentingly gruesome update. It shouldn’t even be called a remake anyways as besides title and general premise, it’s an entirely different beast possessing of its own unique aesthetic and themes far removed from Dario Argento’s vision. Italian director Luca Guadagnino is not a voice I’m familiar with, I haven’t seen a single other film he’s done and looking at his credits it seems this is his first venture into the horror genre, a winning first stroke for sure.

The visual atmosphere here is decidedly different and that’s part of what makes this such a piece all its own. Argento’s neon bathed, opulently saturated colour and lighting is traded in for bleak greys, browns, sickly beiges and suffocated hues that breed uncomfortably onscreen for something less attractive yet far more unsettling than the bejewelled beauty of its predecessor. It also fits the late 70’s Berlin setting which as history reminds us was pretty fucking grim. Young Susie Bannion (Dakota Johnson) journeys from an Ohio Mennonite community to the prestigious Markos dance academy, which as fans of this story know, is front for a nasty coven of ancient witches. Things go awry almost from the second she arrives but the film plays deftly with who and what it means to be a protagonist here and we see a dynamic shift from other girls (played solidly by Mia Goth and Chloë Grace Moretz) who get suspicious and then wish they hadn’t. The school is run by angular, mercurial shryke Madame Blanc, played by Tilda Swinton in one of three roles, because apparently she can do anything.

So is this a better film than Argento’s original? There is of course no right answer to that and I don’t even think they should be compared alongside one another, they may as well be from different galaxies, let alone genres. There’s a sense of diseased malfeasance to these witches, who go out on the town, drink and party just like anyone else but are anything but human. I loved the decision to change Susie’s character from doe eyed heroine to an eerily intuitive avatar with a seemingly dark destiny already written in blood years before. The film wanders about in draft filled hallways, echoey dance studios and chilly, depressing Berlin streets for much of the runtime until the climax arrives, and holy fuck I was not expecting this to go the whole nine yards into outright wanton, surrealistic chaos horror mode. There’s a crazily violent collective piece of mania that happens deep within the bowels of the school building that might be one of my new favourite set pieces in any horror film ever. It tells this story through image, impression, carnage, lighting and fantastic performances from all involved including a terrifying cameo from the grim reaper itself. All set to a hauntingly unconventional score by Radiohead’s Thom Yorke, it’s not a sequence I’ll soon forget and propels the overall film into classic territory. What an experience. 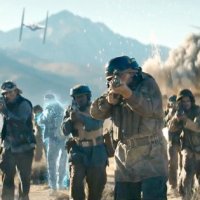