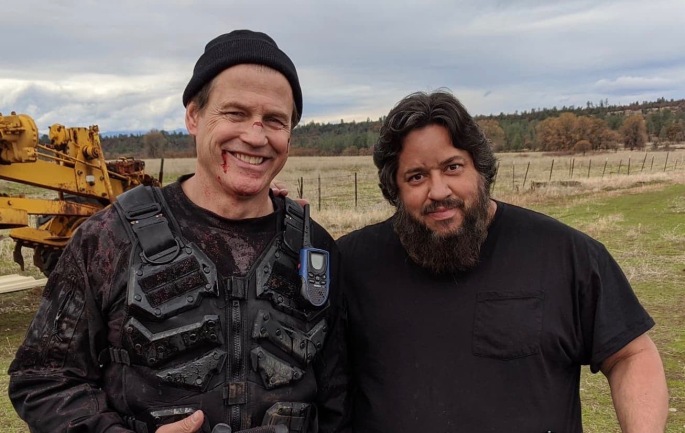 Right off the bat, I like pictures that make you think. Nicholas Meyer once said that movies have the dreadful propensity of doing it all for you, leaving nothing for later like some greedy kid turned loose in a chocolate factory. In the era where everything old is new again – dusted off, repackaged and marketed to an audience for whom, the first time it was released, isn’t a part of their lexicon – it falls upon us to turn to those filmmakers working outside the mainstream; the place where stories that entertain, provoke thought, and evoke the magnitude of the how insurmountable power and the forces that wield it engulf us…constant willing victims that we are.

Though Rene Perez (as he once told me) might be near the bottom of the barrel when it comes to cinematic voices in the tempest that is the modern day film industry, to me, he is a tirelessly, self-sufficient auteur. His pictures – while made for the VOD market (not unlike the VHS boom before it) and designed for the casual scroller in search of an evening’s mild amusement – are more than mere formulaic forays in genre. With The Insurrection, Perez comes out with all guns blazing, literally, but with the timeliness and the gravitas of the message he is projecting. Michael Paré (Eddie and The Cruisers, The Philadelphia Experiment) is a military veteran. Strong, determined, and not afraid to stand tall in the crossfire, yet burdened by regret for the life and family he neglected while serving in the line of duty. This makes him the ideal candidate as well as the only choice, and hope, for the magnetic Wilma Elles’ (Playing with Dolls: Havoc, The Fourth Horseman) Joan Schafer. More than your garden-variety whistle-blower, she is a part of the grand plan, a loyal servant of the ‘Ruling Class’. After securing Paré’s release from prison, Joan tasks the warhorse to keep her alive long enough to tell all – not just of her own private torment, but primarily of a plan that began long ago…to make slaves of us all. And it is for these bold words – how we are but pawns for the powerful, the hungry masses that heartily sup upon the most potent of elixirs supplied by the small glowing screens we carry in our pocket – that she is now targeted for termination by her former overseers. The first casualty, when war comes, is truth, and because of this truth…she must not be allowed to live.

Schafer’s truth also encompasses the concept that we, the controlled masses, are victims of the promise, the carrot, dangled by the influential. She presents the fact that, no matter the microcosm of society in which we dwell, whether it be the real world or the one manufactured on that luminous rectangle that hangs before us in the darkened movie theatre – whether it be Romero’s Land of the Dead, Anderson’s Logan’s Run or Rodriguez’s Alita: Battle Angel – the promise our own ivory tower, our place among the Gods, is far too alluring a bait…as opposed to love, family…life’s simple wonders.

As parallel duels of words and weapons rage, you will be equally gripped the story unfolding as you will by Perez’s dynamic camera and fluid editing. These combine, serving as an absorbing delivery system for a tale of the price those who choose to stand alone against the rising tide of the media-saturated, cynical world that consumes us, ultimately pay. Paré’s steely gladiator projects authority through his silence; a strong accompanist to Elles’ articulate argument relating to how easy it has been, and how easy it still is, for the mighty to suppress any and all beneath them. 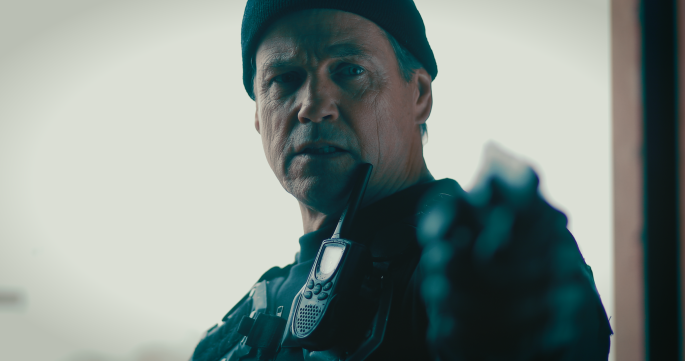 It is a thought-provoking work of intensity and depth that we have before us with The Insurrection. In the tradition of action-thrillers like Peter Hyams’ Narrow Margin and Harold Becker’s Mercy Rising, Perez and his team bring us a splendid declaration of the courage it takes to fight for freedoms we, all too frequently, take for granted.

FOR MORE ON THE CINEMA OF RENE PEREZ VISIT:

One thought on “PAST THE POISON: A Look at Rene Perez’s THE INSURRECTION by Kent Hill”