What a title for a film, and what a wonderful film therein. To Wong Foo Thanks For Everything Julie Newmar feels way ahead of its time for 90’s Hollywood, it’s subversive, witty and although super bubbly and energetic it’s incredibly down to earth, compassionate and sympathetic, not just to the three heroines but every character who shows up. I mean I’ve always known about this one, there was always ‘that movie where Patrick Swayze, Wesley Snipes and John Leguizamo play drag queens’ out there in my awareness but I could never get a DVD and it seemed to be kind of a rare find. It’s on Netflix now and I’m pissed I waited this long to watch it because it’s a dime piece. Swayze and Snipes are Vida and Noxeema, two drag queens who tie in a pageant that sends them off on a road trip to Hollywood as their prize. Via kindness and mentorship they bring along Chi Chi (Leguizamo), a fiery Latina who just wants to win something for once in her life. As they make their way through those less evolved States where the kind of lifestyle they pick isn’t received too well their ragtop breaks down in a tiny one horse town and much of the film is spent on them interacting with, educating and forming bonds with the local townsfolk who are, for the most part, lovely people. Chi Chi falls for a local kid (Jason London, whatever happened to him?) who has eyes for her, Vida does her best to help a battered housewife (Stockard Channing) escape her abusive prick of a husband (Arliss Howard) and Vida forges a strong friendship with eccentric Clara (Alice Drummond) over golden age Hollywood lore. This is all while a homophobic, rapey Sheriff (Chris Penn, RIP) pursues them over a past incident while failing to realize that he himself is buried so deep in the closet that not even a near two hour character arc can get him out. I mean this thing on paper or in the studio pitch meeting could have gotten nervous reactions, it’s not easy to sell. But the three leads do just that, and I’ve never seen performances quite like this from any of them. They are three very masculine tough guys in Hollywood, which is perhaps why they were chosen for this but they are utterly and completely believable as these characters, always seeming larger than life but never ever veering into caricature or parody of this delicate matter. They’re kind, learned, feisty, compassionate, no nonsense role model material and I applaud whoever is responsible for the writing, direction and their performances for taking this seriously and giving three characters who are an absolute joy to spend a film with. Gotta throw a shoutout to Blythe Danner too as one of the townsfolk, she is always so candid, honest and adorable. Oh, and Robin Williams randomly too as some sort of off the books travel agent named (and I’m not even making this up) John Jacob Jingleheimer Schmidt. Fantastic film. 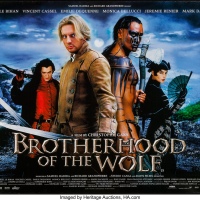