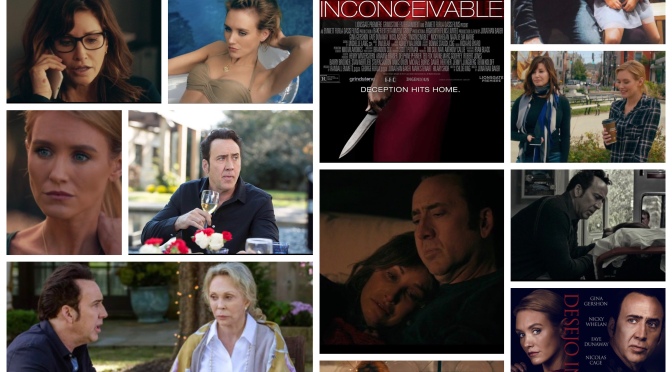 Inconceivable eh. Anytime I see that title I just think of the little dude from The Princess Bride barking out that word. Anyways this was, for the most part, a rotten turkey of a film. I read in the trivia that Lindsay Lohan was attached to star at one point and had to drop out, but her presence would have elevated this thing nicely, because this Nicky Whelan girl they casted in her stead is a dud, no charisma whatsoever. And then there’s the script… this is supposed to be some kind of “Hand that Rocked The Cradle” shoutout where a supposedly battered wife (Whelan) escapes to a new life, befriends a wealthy couple (Nic Cage and Gina Gershon) and becomes their surrogate mother when they can’t properly have kids, until she becomes creepy and is suspected of sinister ulterior motives. But it plays like a bland, lackadaisical Hallmark-lite thriller where nothing much of anything happens and man I was bored to fucking tears. Cage is relaxed, unflappable and just ruffled enough to pass off as a distraught father when he needs to be. Whelan looks like a wax figure with vague mannerisms but I just didn’t buy that this random chick could befriend, infiltrate, gaslight and royally destroy this family, like it just didn’t seem plausible. A fossilized Faye Dunaway shows up as Cage’s suspicious mother, the only person to have doubts about this stranger in their midst but of course no one listens to her pleas of reason. The only person to give a terrific, fully formed performance is Gina Gershon who is always amazing. She makes the wife character sympathetic, believable and almost saves the story, plus it’s a reunion of sorts for her and Cage after Face/Off back in the day which was nice to see. As a thriller though this just strikes out hard, and it’s leading lady doesn’t have the talent or magnetism to carry a HomeSense commercial, let alone a feature film. Lazily plotted, weirdly paced, unpleasant and uninspired. Two Cages out of five, and one of those is solely thanks to Gershon.