There’s nothing quite like the sight of Will Smith armed with a high powered rifle, dog at his side, left completely and utterly alone in a deserted metropolis to scavenge, wander and roar down an empty main drag in abandoned super cars. This is an applicable film right now because that’s kind of how I’ve felt being downtown at work these days, minus the dog and super cars. Smith is Robert Neville, the last man alive on Manhattan Island, or so he thinks. By day he wanders around, searches for food and keeps himself occupied, by night he barricades himself inside a modest fortress while the rest of NYC comes crawling out, now turned into savage marauding zombies by a mysterious virus. Robert tried his best to contact anyone who might be out there by radio and tirelessly works in his lab searching for a cure. This is a strange rhythm that continues for the first half of the film or so until the inevitable progression of a Hollywood narrative interrupts it. I kind of have a love hate relationship with this film, in the sense that I love it for some aspects but not so much others. The first portion of the film is one of the most effective uses of immersive atmosphere and drawing the viewer in I’ve ever seen. Seeing this in iMax back in the day I really felt like I was there with Robert, felt that isolation, despair, restlessness end even blessed solitude at certain moments. It’s a sensational way to open your story, but then as soon as other human characters are added later on, the vacuum like aura is yanked away and it becomes kind of… I dunno, routine. You’ve gotta be a pretty special post apocalyptic film to trick your audience into not only believing the premise but imagining themselves in it, and at the outset they more than succeed. It’s just later on the illusion foibles and loses us a bit. That and the dodgy CGI used on the zombies who are scary no doubt but still a bit rough in the FX department, but hey this was 2007 and Weta was busy working on King Kong so what can you do. I nitpick here and that shouldn’t suggest I don’t love this film, because I do. I just believe a piece that leaps out of the gate so effectively, so convincingly should keep up that lightning in a bottle magic for the whole duration, but that’s just me. It does have one of the single most heartbreaking scenes cinema has to offer, acted flawlessly enough by Smith to leave any badass viewer bawling. Anyone reading this who’s seen the film will know. Oh, and there’s also a weird Batman Vs. Superman poster in Times Square, I’m not sure what the deal is with that but it seems odd for 2007 considering that film wasn’t even made until 2015, no? Maybe there’s some cool time travel trivia to the making of this one. 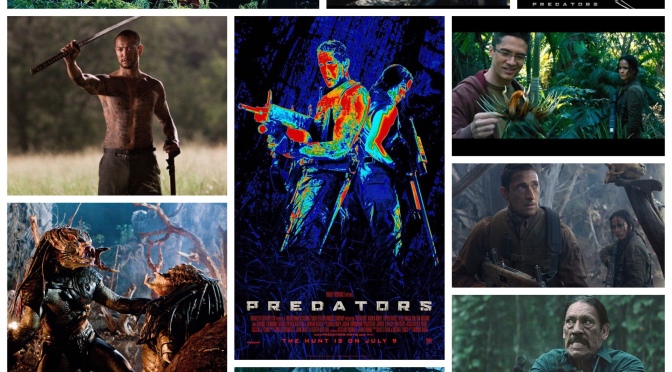 I like to call it Robert Rodriguez’s Predators despite the fact that he only has a producer’s credit, but his influence is all over it, plus the presence of Danny Trejo. This is one solid flick though, and definitely holds up against the first two films. The premise could even be said is more innovative than before, because as with any sequel or update, the story must evolve and break new ground, a feat they’ve outdone themselves with here. The Predators have taken it upon themselves to kidnap the roughest, toughest individuals of the human race and set them loose on a giant planet designed to be a game preserve, and have their fun. Adrien Brody does tense vulnerability to a T as a special ops badass, joined by an Israeli soldier (Alice Braga), a Russian spetznaz operative (Oleg Taktarov), an ex cartel enforcer (Danny Trejo), a psychotic maximum security inmate (Walton Goggins), an African rebel (Mahershala Ali), a disgraced Yakuza (Louis Ozawa Changchien) and… Topher Grace, whose involvement gradually becomes clearer. They’re forced to band together against a squadron of specialized hunters who pursue them, complete with the vicious wildlife native to this planet. It’s incredibly cinematic, brutally entertaining stuff, and the actors give it their all, including Laurence Fishburne as a crazy dude who’s been alone on this world a few too many years. Standout scenes include the chilling moment these poor folks reach the crest of a hill, spot two giant suns in the alien sky and realize they’re not in Kansas anymore, as well as a knockout showdown between the Yakuza and a giant predator that eerily mirrors Sonny Landham’s Billy making a final stand in the original film. Atmospheric, well casted, acted and shot, a solid action horror funhouse that lives up to the Predator legacy.