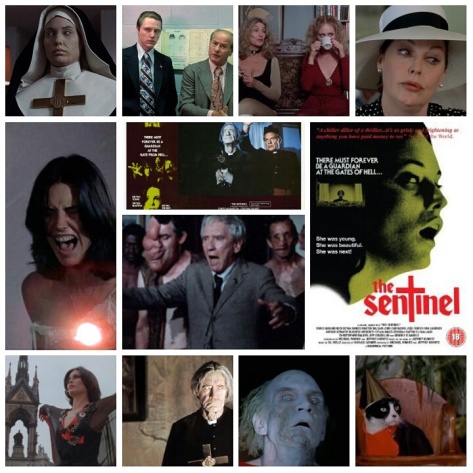 The Sentinel is one of the weirdest thing you’ll ever see. It’s less of a horror and more just a parade of bizarro world situations strung together loosely by a vague haunted apartment story. A young model (Christina Baines) has found a sweet deal on an uptown flat, inhabited by only herself and a blond priest (John Carradine). It’s just too bad that when a deal seems to good to be true in these kinds of movies, there’s almost always some kind of sinister agenda behind it. It’s not too long before spooky stuff comes along, starting with strange physical problems, creepy encounters with her odd lesbian neighbors, flashbacks to her attempted suicide and psychic disturbances that can’t be explained. She soon realizes that she has been brought to this building for a very specific and decidedly sinister reason. The way I described all that sounds kind of routine and pedestrian, but trust me when I say that there’s nothing generic or run of the mill about this absurdity of a film. Everything has a very disconcerting and surreal feel to it, particularly in a whopper of a climax where a portal to hell is opened and all sorts of babbling loonies pour out, deformed, whacked out and adorned in some of the most creatively gross practical effects that will give your gag reflex a solid workout. The film also speckled with a diverse group of actors, some of them quite young looking when you remember that this was 1977. A chatty Eli Wallach shows up as a detective, with a youthful Christopher Walken in tow as his partner, Ava Gardner of all people has a cameo, and watch for Burgess Meredith, Jerry Orbach, Beverly D’Angelo, William Hickey, Jeff Goldblum, Richard Dreyfuss, Chris Sarandon, and Tom Berenger in what must have been one of his very first gigs, a literal walk on part. Very distinct and memorable film, one that pushed the boundaries considering the time period, and never let’s the weirdness mellow down for a single minute.