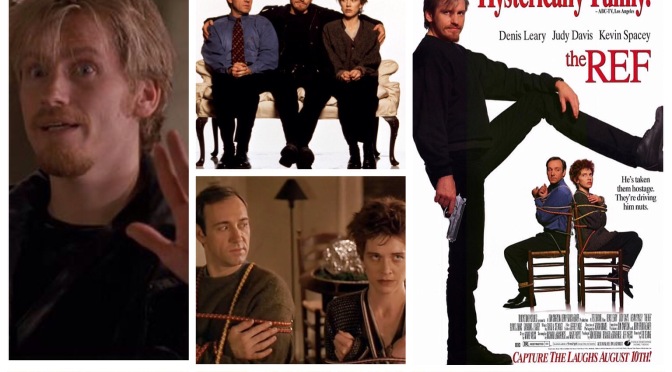 Ted Demme’s The Ref is one of my favourite holiday comedies of all time, one I re watch every and never tire of. It’s the most cheerful black comedy I can think of, while at the same time being one of the most cynical, acid tongued Christmas movies on record. In spite of this pissy tone, however, it still manages to elicit warm fuzzy feelings and make you care for its loveable, curmudgeonly characters. It’s also got a spitfire of a script, given wildly funny life by its star, the one and only Denis Leary. Leary, every the motor mouthed, nicotine fuelled teddy bear, is an actor who’s work is very dear to me. Many times when I was younger and wasn’t in the best place in my head, I’d watch various films of his, and his standup and he always put me in a better place. Here he plays short tempered cat burglar Gus, who is forced to lay low in a small town on Christmas Eve after being busted and nearly caught by a state of the art alarm system. He takes a middle aged couple hostage to hide out at their house, and goes from the proverbial frying pan into the fire. Kevin Spacey and Judy Davis play the couple, who bicker endlessly and drive Gus up the wall by constantly being at each other’s throats and never shutting up. Spacey never comes up short in intense performances, whether dramatic or funny, and he owns the role, meeting Leary and Davis’s manic energy with his own verve. Davis, an underrated actress, pulls out all the stops an delivers like she always does as well. The three of them are left in the house to hash out their issues, criticize each other, fight, make constant jabs at character and all that other lovely Christmas-y stuff. The hilarity peaks when Spacey’s insufferable brother and his family show up for the most awkward Christmas dinner in history, as the trio tries to disguise the fact that they’re harbouring a criminal from the dimwitted clan, and Spacey’s tyrannical bitch of a mother (Glynis Johns). There’s balance to the stressful vibe, though, as Leary’s presence elevates every emotion from the couple and eventually turns things around, all expertly played by the actors for laughs both obvious and subtle. The excellent Raymond J. Barry is crusty delight as the mean spirited Sheriff, and there’s great work from J.K. Simmons, Christine Baranski, Arthur Nascarella, Vincent Pastore, Richard Bright, Adam LeFevre and B.D. Wong. A Christmas classic for me, for a number of reasons, and one of the funniest, overlooked holiday flicks out there.