There are worse ways to spend your lazy Sunday than watching Gary Oldman and Emily Mortimer on a haunted sailboat. Mary is one in a handful of lower budget things that Oldman has insisted on doing lately despite being a desired actor of high acclaim (I didn’t write that last bit with a straight face FYI) and for the most part they’re to be avoided (the two pulpy crime ones with Jessica Alba and Olga Kurylenko are just shit), but I kind of enjoyed this maritime horror yarn for what it was. Oldman plays a fishing tour guide in coastal Florida who dreams of one day having his own boat and patching up his rocky marriage to spitfire Mortimer. Fate tracks him down in the form of the Mary, a mysterious derelict schooner up for auction. It needs a bit of work but there’s nothing a good montage can’t fix, then soon enough it’s out to sea for her maiden voyage with their two daughters and his trusty first mate (Manuel Garcia-Rulfo, who is getting great traction these days). Midway through the voyage strange, supernatural stuff starts happening and it appears that this vessel is indeed haunted by the vengeful spirit of a drowned witch. I’m not going to talk up this thing for more than it is, it’s essentially a cheapie horror time killer and I probably wouldn’t have paid it any attention whatsoever without the presence of Oldman, who I’m a super fan of, and Mortimer who I have always really loved. This is the first time they’ve worked together and it’s really nice to see them onscreen, neither of them phone it in at all despite the fact that the material is clearly beneath them. Decent scares, atmospheric cinematography and solid performances from them make this worth a look. Just don’t get out the top hat and monocle or try and get really critical, because the only person you’ll disappoint is yourself. 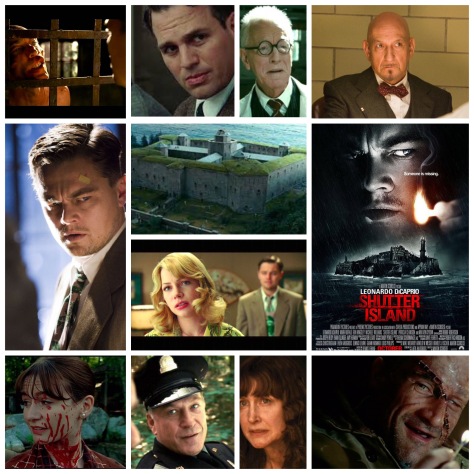 Shutter Island is my favourite film by Martin Scorsese. Now, keep in mind that I still have yet to see heralded classics like Goodfellas and Raging Bull, but that being said I still feel like this clammy psychological opus would remain at the top of the charts. I’m a genre guy at heart, and as such gravitate towards that when watching any director’s work, I just feel more at home wading into fictitious, stylized thrillers than I do with earnest biopics or urban crime dramas, which aren’t always my thing to begin with. Shutter is a brilliant piece, a deliberately dense and serpentine mystery that unfolds step by delicious step, a gift to anyone who loves a good twist and plenty of clues to keep them engaged along the way. Not to mention it’s wonderfully acted, cleverly written and primed with emotional trauma to keep us invested in the puzzle beyond base curiosity. Leonardo DiCaprio is best when portraying intense, tormented people, and his US Marshal Teddy Daniels here is no exception, a haunted man who feels like a caged animal as he investigates the disappearance of a mental patient from a secluded island sanitarium, a place that just doesn’t seem right, with a mood in the air so oppressive you can almost feel the fog, both mental and meteorological, weighing you down. The patient, Rachel Solando (Emily Mortimer will send shivers up and down your spine) seems to have vaporized into thin air, and Teddy’s investigation leads to closed doors, uncooperative staff and a heightened level of dread that lurks beneath every hushed exchange of dialogue and fleeting glimpse at things he, and we, aren’t even sure he really saw. The head doctor (Ben Kingsley, excellent) is clearly hiding something, as is the austere asylum director (Max Von Sydow). The freaky Warden (terrific cameo from Ted Levine, who gets to deliver the film’s best written and most perplexing dialogue) babbles to Teddy in biblical platitudes, and the patients have run amok following a storm that compromised security. Needless to say the plot is deviantly constructed to constantly mess with the audience until the third act revelations, which come as less of a melodramatic thunderclap and more like a quiet, burning sorrow of realization, a tonal choice from Scorsese that hits you way harder. Scorsese has assembled a cast for the ages here, and besides who I’ve mentioned so far we also have Michelle Williams in disconcerting flashbacks as Teddy’s wife, so perfectly played I wish she got a nomination, creepy Elias Koteas as another phantasm from his past, John Carrol Lynch, Mark Ruffalo, Jackie Earle Haley, Robin Bartlett and Patricia Clarkson. The score is a doom soaked death rattle courtesy of Robbie Robertson, not without it’s emotional interludes but thoroughly grievous. There’s also a beautifully slowed down version of ‘Cry’ by Johnnie Ray that accompanies the horrifying dream sequences within the film, adding to the already thick atmosphere nicely. This is a film built to last, both for dutiful rewatches from adoring veterans and discovery by lucky newcomers who get to experience it’s affecting story for the first time. All these boxer biopics, big city mafia ballads and heady stuff seems to have rolled off of me as far as Scorsese goes, I enjoy them, don’t get me wrong, but they’re a one-off as far as how many times I’ll watch them. Give me a well spun, emotionally rich psychological murder mystery with no shortage of style, character and tantalizing thriller elements, however, and I’ll pop that sucker back into the DVD player time and time again. Scorsese’s best effort by far. 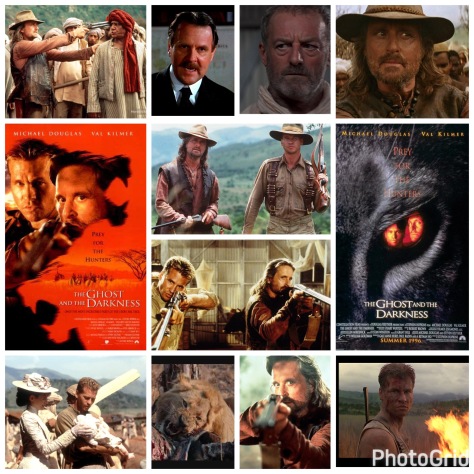 Nothing beats the sheer adventurous spirit and eerie primal mythos that fuels Stephen Hopkin’s The Ghost And The Darkness. It’s a go-to comfort movie for me whenever I’m feeling down or stuck inside on a rainy night. It’s like a campfire tale told on a quite windless night on the Serengeti, and like all the best scary stories, this one has roots in fact. In 1898, production of the East Africa Railroad along the Tsavo River was stalled for weeks, the workers suffering repeated attacks from two savage, mysterious lions. Acting against instinct, killing for sport rather than food and disappearing back into the night as quickly as they came, they were so ferocious and relentless that locals gave the eerie nicknames “the ghost and the darkness.” The story has film written all over it, and Hopkins chooses the swashbuckling, Universal style horror route, and an irresistible tone. Val Kilmer, in his heyday, plays Patterson, an engineer sent by the boorish railroad tycoon Beaumont (Tom Wilkinson, chewing scenery like steak) to speed up production and pick up the slack in order to finish ahead of schedule. Not on the lions watch. He’s scarcely arrived when they begins their endless tirade of horrific attacks, forcing him to trust in the skills of leathery game hunter Remington (Michael Douglas), sort of like Van Helsing crossed with Indiana Jones. The film clocks in under two hours but it seems longer somehow, like we’re stuck with them in real time as the hopelessness of the situation sets into our bones, raising the stakes for our hunters and hammering home how terrifying an ordeal like this must be. Casting is on point here, watch for Bernard Hill as the sympathetic camp doctor, the late Om Puri and a brief early career cameo from Emily Mortimer as Patterson’s wife. Occasionally straying into the realm of melodrama is this one’s only fault, for the most part it’s a hair raising, nightmarish account of adventure and terror told with style, packed with atmospheres and primed to get pulses racing.

Dear Frankie is a sad yet life affirming little modern fairytale set on the evocative Scottish coastal region, in a small fishing village home to many trawlers and vessels which are always coming or going. This is the place that Lizzie (Emily Mortimer) has chosen to raise her young son Frankie (Jack Mcelhone). The one thing missing is a father, who has been missing ever since he was born. Filled with love and a need for Frankie to know at least who he was, she writes him letters as if she were his dad, telling him tales of life at sea and corresponding with him for some years. As he gets older she wishes he could have met him at some point, and comes up with a slightly strange plan. She meets a Stranger (Gerard Butler) in town, who is a sailor himself, and hires him to pose as Frankie’s father, and spend some time with him. Butler agrees, but it’s clear he hasn’t spent much time around kids in his life, and the meeting is awkward at first. Soon they get on well enough, which pleases Lizzie and is good for Frankie. Still, the issue remains that the Stranger is not Frankie’s real father and Lizzie knows this, torn between the cathartic interaction she sees for her son, and the facts that she knows to be true. Mortimer is sorrowful and harbours clear hurt and loneliness, the reaching out she does to Butler as much for herself as it is for Frankie. Butler starts off charming and be used by the proposition, until he realizes the gravity of the situation he is in and learns so,etching about himself that was dormant in his life until he met Lizzie and Frankie. The human relationships are explored tenderly and with patient reverence that ebbs and flows with the English Channel tides. Beautiful stuff.