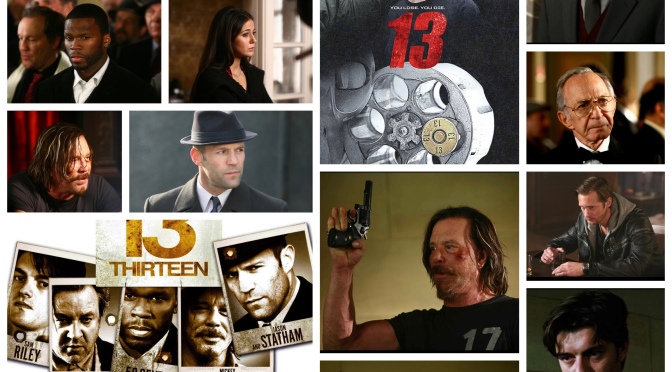 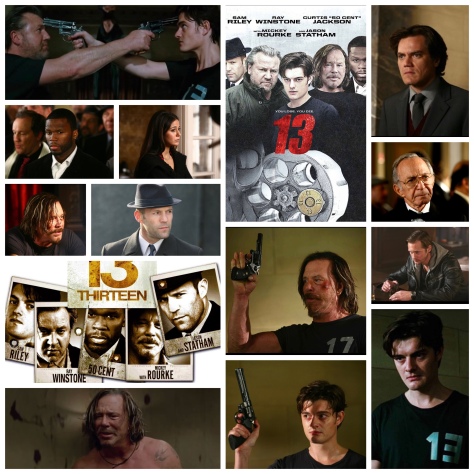 Many directors remake their own films, with varying results. But some foreign made stuff just doesn’t translate well into Hollywood from its more abstract, Euro-centric sensibilities and unfortunately Gela Babluani’s 13 falls victim to that, and hard. You can gloss it up all you want with studio dollars or cast as many heavy hitter actors to pad the lining, but if you do the shot-for-shot thing and ape what you did the first time around, it can just feel weird, awkward and unbecoming. I’ve never seen the original film (also called 13) but I could just simply tell by the structure and tone here that Babluani tried to literally translate his initial piece and the results are just plain bizarre.

This story tells of a super scary underground Russian roulette competition in which handlers enter mentally unstable rejects into an intense round robin of revolvers to the head, with maniacal sports commentator Michael Shannon playing ringmaster and chewing more scenery than he did in The Shape Of Water, which is really saying a lot. Sam Riley, an actor I’ve always greatly admired and seen as underrated, plays a young dude who’s down on his luck and enters this ordeal not fully knowing what he’s up against. The thing here is that several standalone aspects really do work and are interesting, but they’re too episodic and disjointed to pulley the film together into something that makes sense and doesn’t feel cobbled together from used parts. Mickey Rourke is terrific as a jaded ex-con competitor who’s just looking for a way out, but he classes up anything he’s in as a given. Jason Statham plays a posh handler whose fighter (Ray Winstone, also great) is an unhinged lunatic. 50 Cent is also there because I’m pretty sure there’s some clause in low budget genre films where he has to appear in every third one or something (seriously, look at his IMDb). The great Ben Gazzara turns up, obviously wracked with the illness that would end him a few years later, but you’ve gotta hand it to the guy for showing up at all given his condition. Others are around including Alexander Skarsgard, David Zayas, Wayne Duvall and Emmanuelle Chriqui but they’re mostly lost in the shuffle.

The scenes of Russian roulette are intense enough but not too affecting because we don’t give a shart about the characters, apart from perhaps Rourke. This ain’t no Deer Hunter in terms of scenes like that. Your best bet is to check out the original I suppose, which I still have to do. This one has a fantastic cast who are all just tossed to the wind in a flurry of shoddy editing and suspiciously slapdash storytelling. Shame.