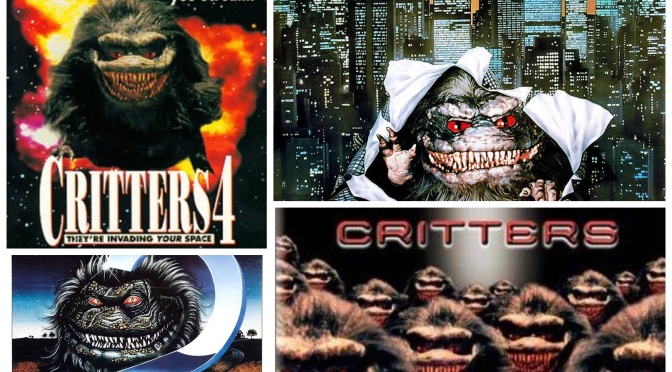 This one kind of demands to be observed and reviewed as a quadrilogy instead of four separate films because they flow into one another and so do many horror franchises that spawned a ton of sequels, but each of the Critters films are under ninety minutes and therefore easy to binge. Add to that the fact that there’s a handy DVD four pack floating around out there for extra convenience and you’ve got one cool little package. It would be easy to dismiss these films as a giant ripoff of Gremlins and indeed there are discernible parallels but there is both enough anatomical and characteristically different features to these creatures as well as narrative originality in the films themselves to make them a franchise worthy of distinction. Plus, ya know, Leonardo DiCaprio in his first movie, like, ever.

So what are Critters? They’re an extremely troublesome, destructive race of outlaw aliens that kind of resemble a hybrid between porcupines, gorillas and… basketballs. They arrive on earth and quite literally roll around like basketballs with no real plan other than to evade a couple shape shifting cosmic bounty hunters dispatched to exterminate them as well as bite, chew, maim and terrify every human being they come across. The first film would kind of have an Amblin/Spielberg vibe if the critters weren’t so savage and R rated in nature, which is a perfect example of why this isn’t simply a Gremlins rehash. The evolved Mogwai were nasty little shits, no doubt, but these things are positively murderous and inflict the kind of gore that Romero would be proud of. The first two films take place in wistful Grover’s Bend, one of those sleepy little American towns where nothing bad ever happens until it does and then the town is never known for anything else *except* that incident. An apple pie rural family headed up by the great Dee Wallace must confront them and defend their farmhouse from critter advances in super gory, chaotic fashion. Oh and Billy Zane shows up with a painfully 80’s ponytail too, before being quickly dispatched in a barn. The second film is more of the same although they thought they could sneakily recast the great M. Emmett Walsh with decidedly less iconic Barry Corbin as the town Sheriff, nice try. The third film is the most effective and not just for Leo Dicaprio but also because the setting change from rural county to dilapidated big city tenement building is way more spookily atmospheric, and allows for some hilarious hijinks with a laundry chute. The fourth film should be great because it’s that obligatory horror entry that’s set in space (like Jason X or Leprechaun In Space or.. wasn’t there even a Hellraiser in space?) but it kind of plods along in humdrum territory, the critters don’t even show up until like over halfway through and the only really memorable work comes from the ever awesome Brad Dourif and the luminous Angela Bassett.

The one character besides the Critters that holds these four flicks together is a town drunk turned intergalactic warrior played by Don Keith Opper, who is kind of a weird, aloof dude but provides each new film with eccentric gusto while new supporting players surround him. DiCaprio shows signs of his career to come and carries the highlight third entry nicely, while the first two feel very much akin to one another in a sort of Halloween and Halloween 2 kind of way. Low budget slapdash cheese like this is my bread and butter, I’m very fond of 80’s trash horror franchises like this and was beyond stoked to see the DVD at Walmart last second before going through the til and be able to binge all four films in one night. They’re great fare of this shit is your cup of tea, and they have this maniacal, almost Evil Dead style comedic sensibility to them that I greatly appreciated. My favourite scene of the whole thing: Dee Wallace brandishes a giant double barrel shotgun out her front door to ward off two Critters incoming up the driveway. Suddenly they speak to each other in some Furby gibberish with subtitles, one observing “They have weapons!” “So?”, his buddy retorts. Dee fires off a round that obliterates one of the two beasts into a puddle of fur and blood. The other one looks over and exclaims “Fuck!” in their weird little outer space creole dialect. I love that warped sense of humour gifted unto these scrappy little flicks, they’re a ton of fun.