Dario Argento’s Inferno is the most abstract, expressionistic and nearly incomprehensible entry in his Witch trilogy, like oil and blood smeared on canvas haphazardly to create something just this side of the conscious realm. The other two films, Suspiria and Mother Of Tears, each have their place in the story, with this one doing middle chapter duties, but really they all work better as standalone films more than anything cohesive. While the film clings loosely to the idea of two college students investigating separate Witch covens in both Rome and New York, that’s just the baseline for a petrifying, beautifully surreal mood piece full of thumping psychedelic music by Claudio Simonetti and Goblin, and episodic set pieces of bizarre dreamlike horror. Argento is the undeniable king of lighting and atmosphere, and although other areas of the work like story, dialogue and acting suffer, it’s easy to look past that and get swept up in his magnificent visions. Unearthly light and wind ripples over the hair of a gorgeously enchanting witch who holds a cat and and stares down one of the protagonists in a lecture hall. An eerie full moon possesses one man trying to drown a bag of cats, and a butcher knife wielding whacko. A woman descends underwater into a flooded derelict building and discovers a bloated corpse floating there in the film’s most harrowing scene. Argento’s films are less about the rhyme and reason, more about the feeling of it all than anything else, very much like dreams. Inferno is one of his very best, a feverish madhouse of light, colour, operatic violence and hypnotic music.
-Nate Hill 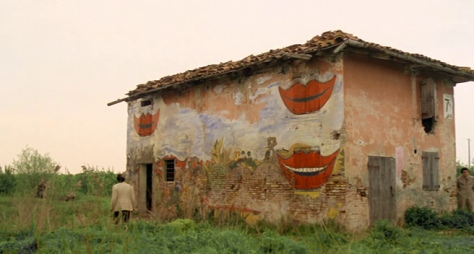 I must have been thirteen or fourteen at the time, and I don’t remember too much about what my world was like then, with the exception of it being a lesser variation of what it is now. If Argento, Fulci, and Bava are the more obvious names who introduced me to the black leather and brighter blood which would eventually shape my definitive creative conscious, director Pupi Avati opened up different doors entirely with his magnificent THE HOUSE WITH THE LAUGHING WINDOWS, a brilliant subversion of the Giallo formula with heavy doses of folk horror and genuine social-political subtext.

The Gialli that I am particularly fond of have more in common with THROUGH THE LOOKING GLASS than the standard crime narratives of the yellow paperback novels from which they derive their title, and as such, this is as important an entry as SUSPIRIA, Fulci’s THE PSYCHIC, or Sergio Martino’s delectably psyched-out masterpiece ALL THE COLORS OF THE DARK. What is perhaps most immediately intriguing is the placement of this particular rabbit hole in a twisted, though ultimately familiar semblance of reality. By association, the Giallo is a heightened affair, but Avati is skillful in how and where he engages with the fantastical.

The log-line for this one is refreshingly simple: a man, Stefano (Lino Capolicchio) arrives at a small, seemingly quiet villa on business, tasked with restoring a fresco of (what at least appears to be) Saint Sebastian in the town’s church. Soon after arriving, however, things take a sharp turn for the macabre as our hero receives anonymous threatening phone calls and gets kicked out of his hotel to make room for another guest; a guest who never shows up, and was never booked to begin with. He then moves into an old house in the woods which he shares with only an elderly woman upstairs and although she never seems to leave her bed, movement is explicitly heard at all hours of the night. A dark secret seems to hang over the village, one the locals would prefer to keep from the knowledge of the general public. After the sudden murder of a friend who seemed to have some answers, Stefano decides to do some amateur detective work of his own which will ultimately drive him to madness.

But will curiosity kill the cat? When one is watching a Giallo – and a good one, to boot – all cards are on the table. As a long-time admirer of films that depict the deterioration of a mind in unison with depicting an industry, culture, or world at large on its way out, I find Avati’s film to be utterly fascinating. Here we have the classic descent-into-madness narrative, a staple of the genre, unfolding beside a positively post-apocalyptic landscape; the villa, with all its abandoned ambitions and lost souls, is most likely intended as a commentary on post-War Italy and how certain communities struggled to escape their past. Stefano’s various romantic flings with school teachers and conversations with drunks, bat-shit crazy altar boys, and of course the old woman upstairs reveal a tight circle of damned spirits, only a handful of whom dream of escape, though most only wish to keep a vicious cycle going for as long as it possibly can.

It’s quite interesting, or at least it might be to certain readers, to note that in the course of a career spanning nearly half a century, Avati only made (to my knowledge) about half a dozen features that could be branded as horror films, the most widely-acknowledged of which are this one and the equally exceptional ZEDER (aka REVENGE OF THE DEAD). Skimming through an extensive filmography such as this, it seems Avati has covered just about every base he can, returning to the realm of the macabre time and time again, but mostly at the helm of much lighter, though I’m sure no less thoughtful fare. It is clear that while he is not technically a “genre” director, Avati has a penchant for brooding phantasmagoria; a dark side that only shows itself when deemed absolutely necessary – which in turn makes for some of the most consistently engaging tales of terror on the market.

Pasquale Rachini’s photography is a real treat; I have always loved how the camera finds raw beauty early on, and throughout, in the wide lavish wetlands and partially destroyed old houses featured around the villa. A sense of purest reality is created, and then soon shattered, as day becomes night and lighting becomes more evocative, locating what lurks behind and between the shadows as well as what creates them in the first place. And yet, it will seem rather understated to those for whom “Giallo” is defined only by 70’s-era Argento (DEEP RED, SUSPIRIA, etc.), but alas, I believe it is as stunning as anything the genre has to offer. And who could forget to mention Amedeo Tommasi’s score, which swings effortlessly between nail-biting tension and fleeting romanticism, and remains shamefully unavailable to the general public to this day. One can only hope somebody, anybody, will rectify this sooner than later; it really is fantastic. 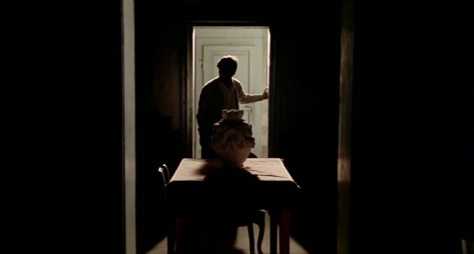 Some films just feel as if they were made for you, and at their best, Gialli have that precise effect on me. THE HOUSE WITH THE LAUGHING WINDOWS, for all its WICKER MAN-esque outsider horror, nevertheless feels like home. This may seem like a bit of an odd notion to those who seldom dance with the devils of celluloid, but if it happens that you do so more often than not, you will know exactly what I mean. Danger and mystery alike can be so invigorating, and Avati has conjured an atmosphere of dread so palpable that a knife (of any kind) simply wouldn’t cut it. Further proof that some of the genre’s best offerings come from those who don’t necessarily specialize in but nonetheless retain an honest appreciation for its seductive allure; one of many horror films that is more or less about watching horror films, and luckily, we are spared the usual contradictory moralism and regrettable air of superiority. Nothing but love emits from these frames. Love, blood, sweat, tears, purple flowers, tape recorders, and architecture with eyes and ears acute enough to catch even the lowest whisper.